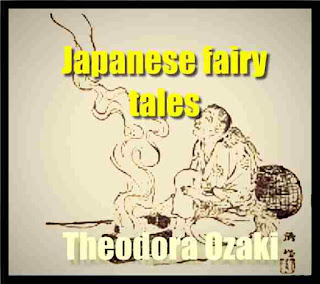 From the introduction:
This collection of Japanese fairy tales is the outcome of a suggestion made to me indirectly through a friend by Mr Andrew Lang. They have been translated from the modern version written by Sadanami San jin.
These stories are not literal translations, and though the Japanese story and all quaint Japanese expressions have been faithfully preserved, they have been told more with the view to interest young readers of the West than the technical student of folk-lore. Grateful acknowledgement is due to Mr Y. Yasuoka, Miss Fusa Okamoto, my brother Nobumori Ozaki, Dr Yoshihiro Takaki, and Miss Kameko Yamao, who have helped me with translations.
The story which I have named "The Story of the Man who did not Wish to Die " is taken from a little book written a hundred years ago by one Shinsui Tamenaga. It is named Chosei Furo, or ''Longevity." "The Bamboo-cutter and the Moon-child " is taken from the classic " Taketari Monogatari," and is not classed by the Japanese. among their fairy tales, though it really belongs to this class of literature.
The pictures were drawn by Mr Kakuzo Fujiyama, a Tokio artist. In telling these stories in English I have followed my fancy in adding such touches of local colour or description as they seemed to need or as pleased me, and in one or two instances I have gathered in an incident from another version. At all times, among my friends, both young and old, English or American, I have always found eager listeners to the beautiful legends and fairy tales of Japan, and in telling them I have also found that they were still unknown to the vast majority, and this has encouraged me to write them for the children of the West.

My lord bag of rice 1
The tongue-cut sparrow 12
The story of Urashima Taro, the fisher lad 25
The farmer and the badger 43
The " shinansha," or the south-pointing carriage 53
The adventures of Kintaro, the golden boy 58
The story of princess hase 71
The story of the man who did not wish to die 85
-the bamboo-cutter and the moon-child 96
The mirror of Matsuyama 119
The goblin of adachigahara 140
The sagacious monkey and the boar 148
The happy hunter and the skilful fisher 153
The story of the old man who made withered trees
To flower 178
^he jellyfish and the monkey 192
The quarrel of the monkey and the crab 207
The white hare and the crocodiles 219
The story of Prince Yamato take 230
Momotaro, or the story of the son of a peach 251
The ogre of Rashomon 271
How an old man lost his wen 282
The stones of five colours and the empress Jokwa 293
the book details : Download  Japanese fairy tales 10 MB