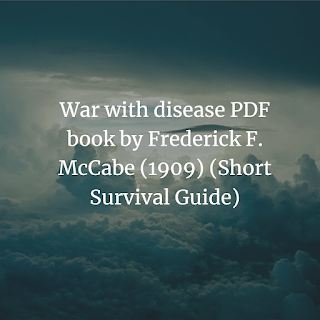 We in the Army are probably brought more into direct contact with epidemics of disease, such as that which occurred at Bloemfontein, than are the average civilians. Consequently, we are better able to realize their terrible effects. Surgeon-Lieutenant MacCabe's lectures will prove to you that these diseases are not irresistible.

They can be fought and defeated in just the same way as any other enemy, by the organization, initiative, and suitable strategy. It is simply a question of correctly weighing the powers of our enemy and adopting the best plan for defeating him. Surgeon- Lieutenant MacCabe will put this before you in a most convincing manner, in plain, straightforward language, which you can not only understand yourselves, but which will be easy for you to pass on to squadrons, troops, and sections respectively.

Some of the contents

LECTURE V
Health and fitness— Soldiers and the invisible foe: disease— Training— How to fight thirst— Effects of excessive smoking on the heart— Venereal diseases— Precautions to be taken on foreign service— Precautions against tetanus— The prevention of sore feet— Conclusion
Publication date: (1909)