Who is to be master of the world? : an introduction to the philosophy of Friedrich Nietzsche. 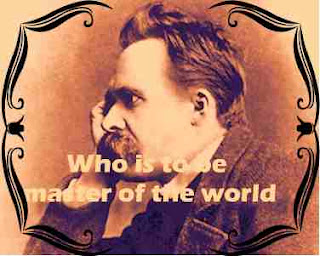 Dear Mr Ludovici, — You want me to write an introduction to your lectures? Well, you may have one — you may have one in this letter, which I allow you to reproduce verbatim in your book. To begin with then: I like your lectures — I think them, in their lucidity, even the best I have read in your language — but I hardly like the notion of your giving lectures on Nietzsche, because I think it contrary to the spirit of your great master to do this. I think it wrong to instruct people — if you have something to instruct them with. People ought to be instructed by those who have nothing to say, nothing to give, nothing to teach, nothing to do.
These teachers of nothing do more good than you: they make us slaves, and you know that according to your master, all higher culture must be based upon slavery. Why then interfere with the natural process of enslavement, of stultification, of education which is going on around us? Why not act up to your Machiavellian principles, and rather lecture on the drama, socialism, folklore, the sins of the upper classes, or the sanitation of May fair? Why make a creed popular, which ought to remain esoteric?

I am going to speak to you of Friedrich Nietzsche — the Immoralist.
A philosopher is more difficult to understand, and yet more full of riches for those who do understand him, it would be hard to find. Why should I wish to speak to you of Nietzsche? The literature which has grown around his name and philosophy is already enormous. If you have read a third of it, you are already informed concerning him. Nietzsche died but eight years ago, and he is now one of the most striking figures of modern European philosophy.
It is with the deepest regret, however, that the inquirer into his life and works, gradually realizes how completely and often maliciously, he has been misinterpreted and misjudged; — not only by ignorant commentators and by many of those learned professors who have been lured to the exposition of his works by the latter's inherent fascination, but even by his best and oldest friends as well.
It was found convenient to treat Nietzsche's doctrine of Superman, next, in order, and for the reasons stated in the last paper. It will be remembered that moral values were there said to be quite pointless, which did not have the rearing of some particular type of man as their end, as their goal.
" Who is to be master of the world?" was the question which recurred in my last lecture; we saw that this was entirely a question of taste, and moreover, one left for us to decide. We saw, also, that in deciding it we involved ourselves in a still more intricate question, — the question of morality, and that the one conditioned the other.
Taking Nietzsche's doctrine of Superman, his taste in regard to man, first, therefore, we shall be better prepared, when the time comes, to understand the morality with which he wishes to attain to it; this morality, as I have already informed you, I shall dis- cuss in the last paper. Nietzsche speaks of himself as a firstling and he adds: " firstlings are ever sacrificed." To the old idols, on the altars of society's old idols, firstlings are ever sacrificed; they are young; their flesh is still tender; that tickleth * Delivered at the University of London on December 2nd, 1908. 52 Superman 53 old palates.
How could firstlings help to be sacrificed, since they excite old idol-priests?* Already in 1883, Nietzsche could speak in this way of himself and of those whom he wished to rally around him. Two parts of his Zarathustra had been written; five most original books had gone out to the world, and he was beginning to understand, from the reception these works were receiving, that his mouth was not for the ears of his time.
What people did not comprehend in him, they dis- liked; what was new and strange, proved irksome to them, and everything that threatened to disturb their smug ease, they did not hesitate to reject. In short, as he tells us, they sacrificed him, like a firstling, to the idols that still held sway over them. Nietzsche made a special diagnosis of European culture, and he found it attacked by a terrible disease
the book details : Download 9 MB - PDF ebook