Way to wisdom, an introduction to philosophy 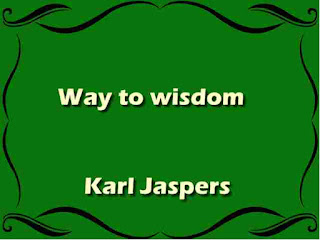 Excerpt :
What philosophy is and how much it is worth .re matters of controversy. One may expect it to yield extraordinary revelations or one may view it with indifference as thinking in the void. One may look upon it with awe as the meaningful endeavour of exceptional men or despise it as the superfluous broodings of Dreamers. One may take the attitude that it is the concern of all men, and hence must be basically simple and intelligible, or one may think of it as hopelessly difficult. And indeed, what goes by the name of philosophy provides examples to warrant all these conflicting judgments.
For the scientific-minded, the worst aspect of philosophy is that it produces no universally valid ^esults; it provides nothing that we can know and thus possess. Whereas the sciences in their fields have gained; compelling certain and universally recognized insights, philosophy, despite thousands of years of endeavour, has done nothing of the sort.
This is undeniable: in philosophy, there is no generally accepted, definitive knowledge. Any insight that for cogent reasons is recognized by all has ipso facto become scientific knowledge and ceased to be philosophy; its relevance is limited to a special sphere of the knowable.
Nor is philosophical thought, like the sciences, characterized by progressive development. Beyond any doubt, we are far more advanced than Hippocratej< the Greek physician. But we are scarcely entitled ti say that we have progressed beyond Plato.
We have only advanced beyond his materials, beyond the.| scientific findings of which he made use. In philosophy itself, we have scarcely regained his level. It lies in the very nature of philosophy, as distinguished from the sciences, that in any of its forms  must dispense with the unanimous recognition of all/
The certainty to which it aspires is not of the objective; scientific sort, which is the same for every mind; it is an inner certainty in which a man's whole being participates. Whereas science always pertains to particular^ objects, the knowledge of which is by no means indispensable to all men, philosophy deals with the wholei| of being, which concerns man as man, with a truth which, wherever it is manifested, moves us more deeply than any scientific knowledge.
Systematic philosophy is indeed bound up with the sciences. It always reckons with the most advanced scientific findings of its time. But essentially philosophy springs from a different source. It emerges before any science, wherever men achieve awareness.
The existence of such a philosophy without science is revealed in several striking ways : First: In philosophical matters, almost everyone believes himself capable of judgment. Whereas it is recognized that in the study of science, training, and methods are indispensable to understanding, in philosophy men generally assume that they are competent to form an opinion without preliminary study. Our own, our own destiny, our own experience strike as a sufficient basis for philosophical opinions. This notion that philosophy must be accessible to all s justified.
The circuitous paths travelled by specialists n philosophy have meaning only if they lead man to m aware of being and of his place in it. Second: Philosophical thought must always spring prom-free creation. Every man must accomplish it for himself. ! A marvellous indication of man's innate disposition o philosophy is to be found in the questions asked by: children.