Some problems of philosophy 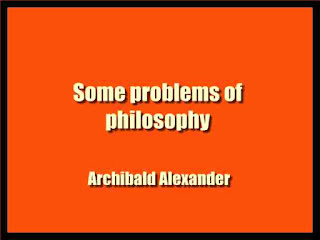 To enumerate all of the difficulties of Philosophy that have thus far not been wholly removed would be to give a synopsis of a philosophical system. It is possible, however, to classify the problems and the difficulties which lie in the way of those who study Philosophy, and the recognition of obstacles is usually the first step toward their removal.
The most apparent difficulties of philosophical investigation are what may be called popular difficulties. They are seldom real. They are usually fictitious, created by ignorant or superficial persons. They are intended to excite prejudice against philosophical science by emphasizing its inutility, its absurdity, sometimes its mischievous character. Those who raise these difficulties ordinarily talk about " Metaphysics " as if it were all of Philosophy. Some of them imagine that each man has his own system, which is as good as the system of any other man.
They will expound their views about the idleness of " metaphysical study " as lightly as they will tell an after-dinner story. It is not uncommon to hear them scoff at the study of Logic, and in this is often to be found an explanation of their position. It is not worthwhile for me to criticise such views. A man who has not learned the alphabet is usually deficient in knowledge of grammar.
A surgeon who does not know anatomy is not likely to inspire confidence. The philosophical dilettante who plunges into the solution of problems of great im- portance without scientific preparation may The Difficulties of Philosophy. be left to the task of " drawing out leviathan with a hook," and one need not be disturbed if his unsuccessful efforts lead him to the conclusion that " metaphysics " is obscure, useless, and irreligious.
The inductive branches of Philosophy, such as Psychology, for example, present a great many difficulties which are common to all branches of science — difficulties of observation or experiment, of the interpretation of facts, of the, confirming of hypotheses, of the establishment of laws.
It is not necessary that these common but not insuperable difficulties should be extensively noticed. It may be pointed out, however, that the difficulties of mental science are increased by the necessity of employing a subjective, as well as an objective method. Self-consciousness cannot be aided in its observation by any instruments, and it is extremely liable to make mistakes because its testimony cannot be directly corroborated.
Beyond this peculiarity, there is nothing that distinguishes the general difficulties of inductive philosophy from those of the natural sciences. But all the inductive sciences lead ultimately to Metaphysics.
I do not mean " Metaphysics " in a popular sense, but in the Aristotelian sense, as the Science of Being, and we have a class of difficulties presented which cannot be satisfactorily removed by induction. We are brought at once to the region of speculation. Such problems are essentially metaphysical, and the question as to the possibility of Metaphysics is suggested.
The mental sciences, whether they be inductive or not, as soon as they border upon Metaphysics present difficulties, often of the most perplexing kind, and in the mysterious country lying between Theology and Philosophy many a hopeful, speculative mind has been lost in doubt or extra vao^ant theory

I. The Difficulties of Philosophy.
II. The Problem of the Ultimate Nature of Matter ...... 23
III. The Problem of the Origin of Organic Being ...... 39
IV. Some Difficulties connected with any The doctrine of the Ego . . . 44
V. The unconscious Mental States. 47
VI. The Problem of Physiological Psychology 53
VII. Reason in Contradiction to Reason. 64
VIII. The Relation of Belief to Knowledge 66
IX. The Problem of the Human Will. jy
X. The Immortality of the Soul. 80
XL The Feeling of Obligation and Moral Knowledge. 83
XII. Is Hedonism equivalent to Pessimism? 93
XIII. The Ethical Conflict. .97
XIV. The Doctrine of a First Cause. 104
XV. The Infinite . . . . . 112
XVI. God and the Principle of Right. 118
XVII. The Atheistic Meaning of Pantheism. 121
XVIII. The Doctrine of Cause and Effect. 123