Dictionary of Latin and Greek quotations 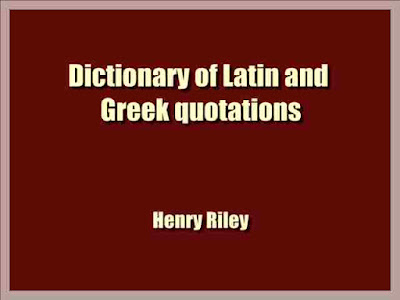 Proverbs, maxims, and mottos, classical and medieval, including law terms and phrases

A Dictionary of Latin Quotations more copious, correct, and complete than any hitherto published had long been a cherished idea of the publisher and awaited only- time and circumstance for its development. Finding in the present editor a gentleman well qualified both by reading and industry to carry out his views, he placed the materials in his hands, and these with large additions, the fruit of further researches, are now laid before the reader. The present collection differs from its predecessors in being limited exclusively to Latin and Greek quotations, the publisher intending, at a later period, to give French, Italian, Spanish, and German, in a separate volume.
This arrangement has enabled him to nearly quadruple the number of Latin quotations given heretofore, and to extend the number of Greek from about twenty to up-wards of five hundred; amounting in all to an aggregate of more than eight thousand. The translations are throughout either
Of carefully revised, and as literal, us is content with neatness and point. It would have been easy to make many of them more epigrammatic, but it was thought better to leave this to the reader's own taste. Authorities are adjoined wherever it has been found possible to discover them, and in vast many instances, they appear for the first time in a Dictionary of quotation.
Many of the nonsensical commentaries have been dispensed with, as in almost every instance, with translation is correct, the quotation is more Intelli- without them. Our only fear is that we have adopted too many. One new, and it is hoped valuable, feature in present volume, is the marking of the metrical entities, which has been done in all cases whirr their absence might lead to mispronunciation.
A quotation, how appropriate, would entirely lose its effect with those who are best able to appreciate its force if blemished by false delivery. It has been thought unnecessary to mark the finale, because, as the classical reader will know, it is never silent.
The publisher claims little merit for himself in what concerns this volume, save the plan and diligent reading of the proofs; but he thinks it right to avow the assistance of his eldest son, William Simpkin Dohn, who has been a useful coadjutor throughout, particularly in the Greek portion. The printer, too, richly deserves his meed of praise for watchfulness and scholarship. It remains only to speak of previous collections of the same character.
The first and principal is Macedonnel's, originally published in 1796, and repeatedly reprinted, with gradual improvements, up to a ninth edition in 1826. This is the work of a scholar, and praiseworthy as a first attempt, but much too imperfect to satisfy the wants of the present day.
The next was Moore's, which, though as recent as 1831, is little more than an amplification of Macdonnell's, avoiding as much as possible, for copyright considerations, the very words of his translations, seldom improving them.
The Dictionary of Quotations which passes under the name of Blagdon (we say this advisedly, as the work was posthumous) differs so entirely from the plan of the present, as scarcely to be cited as a precursor. It is arranged under English ' common-places,' which are illustrated by lengthy quotations from a few of the Greek and Latin poets, each accompanied by metrical versions selected chiefly from Pope, Dryden, Francis, and Creech. It is a small volume of limited contents but executed up to its pretensions.