The Internal Wiring of Buildings 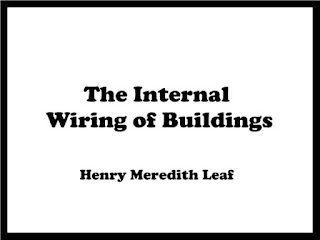 From the introduction:
Electric energy is now so universally adopted, for lighting, heating, the transmission of power and other purjiDseSj that insulated wires or cables (as they are often called) for convening the current are now fixed iii most buildings of any importance.
The conditions under which these conductors have to perform their part of carrying the current vary within very wide limits, and it is the object of this treatise to describe the various means of fixing the wires to suit the different conditions under which the current is likely to be employed.
The science of fitting up a suitable system of conductors, or " wiring," as it is termed, is not at the present time an exact science but is rapidly becoming so.
Among engineers, there are several rival methods of wiring in use, and many discussions have taken place in technical journals, and at the meetings of engineering societies, on the subject of the relative advantages of concentric wiring, wood casing, and systems of iron and another tubing.
Each system has merits for special purposes. Generally speaking, no one system can be said to be universally better than another, provided always that due care is taken in fixing the conductors. It has been said with truth that it is better to have an installation consisting of inferior cables and materials, well and carefully fixed, than one in which, although better materials are used, sufficient care has not been exercised in fixing and jointing.
By far the greater number of wiring installations are carried out in buildings in which the current is taken from central stations, so, unless the mention is made to the contrary, it is assumed in this book that the current is obtained in this manner find that it is direct, and not alternating in character. It is impossible to give a description of the nature of electricity in a treatise on wiring.
Those who wish to understand how it is that the so-called lines of force in the ether can give rise to electric currents when cut by conductors should consult Dr, Oliver Lodges' Modern Views of Electricity.
In this book, the production of electric currents is explained by mechanical analogies, and the reader is enabled to get some inkling of the real nature of electricity. Roughly speaking, it may be stated that a dynamo produces current because its magnets set up strains in the ether and the conductors on the armature have the power of absorbing these strains and of thus producing so-called electric currents; it is only, however, by the expenditure of mechanical energy in moving the conductors of the armature that these strains in the ether can be absorbed, so that a dynamo may be considered merely as a machine for converting mechanical into electrical energy.
the book details : Download The Internal Wiring of Buildings - 9.7 MB