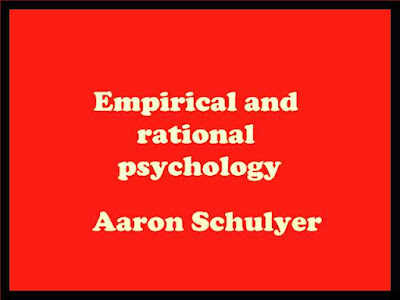 From introduction:
Psychology treats directly Cognition, Feeling, and Volition, and indirectly Intellect, Sensibility, and Will. Greater prominence is thus given to the phenomena of the soul, with their conditions and laws, than to the faculties implied by these phenomena.
Though much light has, no doubt, been thrown upon Psychology by the investigations of Physiologists, — light which the Psychologist should heartily welcome,— yet to know any phenomenon, as it is in itself, we must study it as revealed in consciousness. This is especially true of the higher processes of thought.
Thus, to understand the nature of the reasoning process, it will not suffice to examine the structure and functions of the nerves, the ganglia, the brain, and the organs of sense, but we must analyze the reasoning process itself as a known fact of conscious experience.
The discussion of the Intuitions is introduced at an early stage since they afford the fundamental principles for subsequent investigations. To defer the consideration of fundamental principles to the last pages, as is commonly done, would embarrass all preceding discussions. What would be thought of a writer on Geometry, who should put his axioms on the last page of his book?
The difficulty of discussing fundamental principles is no justification for such an arrangement, since any minds mature enough to undertake the study of Psychology, is certainly prepared to understand a clear presentation of its first principles..
The elements involved in the act of Perception have been discriminated against with much care, and an attempt has been made to exhibit clearly and correctly the nature of this act. That a correct explanation of perception has been given, will, it is believed, be admitted by those who will carefully study this process in itself,- as revealed by their own consciousness, and as developed in the chapters pertaining to this subject.
The interesting phenomena of Representation, embracing Memory, Imagination, and Phantasy have been concisely and clearly exhibited. Light has been thrown on the Law of Association, especially in regard to the transition from one series of representations to another. The processes of Elaboration have been fully and carefully treated.
These phenomena can be understood only by actually exhibiting them, and developing their laws. No vague discourse about the logical processes will suffice to make known their principles and laws or to unfold their philosophy.
The Aristotelian Logic will, perhaps, never be superseded; but, as is needful, it will be supplemented by Modern Logic, which supplies the defects of the ancient, while the ancient affords the necessary basis for the modern. Each may, therefore, be regarded as the complement or indispensable counterpart of the other.
The brief space of a few pages only has been given to the subjects of Mood, Figure, and Reduction. These sub-jects, though not essential to Logic itself, are interesting in themselves, and in their historical associations.
Some contents of the book:
III. — Rational Intuition — General View 39
IV. — Intuitions Continued — Non-Dynamical Conditions. . 46
V. — Intuitions Continued — Dynamical Conditions. ... 59
VI. — Intuitions Continued — The Ego and Personal Identity. 75
VII. -Sensation 89
VIII. — Perception — General View 98
IX — Perception through Smell and Taste 102
X. — Perception through Touch and Hearing . . . . . 107
XL — Perception through Sight 113
XII. — Acquired Perception 129
XIII. — Development and Product of Perception 139
XIV. — Errors in Perception ... 145
XV. — Passivity and Activity and Conditions 152
XVI. — Theories of Perception — Ancient, Medieval, Cartesian. 156 XVII. — Theories of Perception Continued — Locke, Berkeley, Hume ... 165
XVIII. — Theories of Perception Continued — Kant, Reid, Hamilton 174
XIX. — Theories of Perception Concluded — Mill and Porter. 184
the book details :