The wise men of Greece, in a series of dramatic dialogues 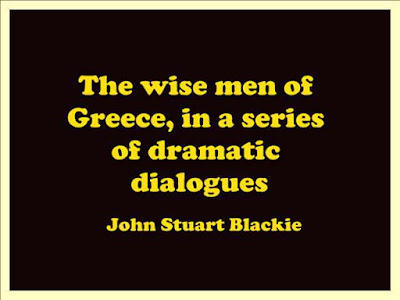 Contents:
Epistle dedicatory.--Pythagoras.--Thales.--Xenophanes.--Heraclitus.--Empedocles.--Anaxagoras.--Aristodemus; or, The atheist.--Aristippus; or, Pleasure.--The death of Socrates.--Plato.--Notes
Excerpt:
My Dear Taylor. — I have requested the honour of dedicating this book to you, partly that I might signify, in a small way, the respect which I entertain for your character and efficiency as a literary man ; partly because, if there is anything of a wise conception in the structure of these dialogues, and any degree of adequacy in their execution,
I know no person in these islands at once more willing and more able than yourself to pronounce a judgment on their merits or demerits, which I shall think it my duty to respect. The conception of the book was simply this: Take the first six names in the list, Pythagoras,
Thales, Xenophanes, Heraclitus, Empedocles, Anaxagoras, and you will see in a moment that, though few persons in these times, who have received what is called a liberal education, can be ignorant of these. names, as of certain sign-posts, land-marks, or milestones in the history of human thought, very few persons, even of the best educated, have anything but the most meagre notion of the philosophical significance, intellectual dignity, and moral power of the men whom these names represent. What I have attempted is to give the general reading public, so far as they may care for wisdom, a living concrete notion of what the thought of Thales was in his day to the society of Miletus; what Pythagoras, with his school of moral discipline, was to Crotona;
Xenophanes to Colophon, and so with the rest. And, as what we know of the pre-Socratic philosophy in Greece exists only in the shape of scattered notices and a few fragments, it appeared to me that the natural way of making these imperfect remains interesting was to follow the example of the architects, who restore a ruined edifice in the original style by the clear indication of its ruins; and, in order to do these two things were necessary, an ac- curate study of the fragments, and a sympathetic appreciation of the soul by which the fragments were originally animated. How far I have succeeded in this delicate work, scholars and thinkers will judge.
I can only tell them that they will get here no mere soap bubbles, lightly blown for a summer's recreation, but the product of hard work, and years of study. I had no ambition, even if I had had the ability, to make a Pythagoras or an Empedocles a mere mouthpiece to spout my sentiments.
the book details :