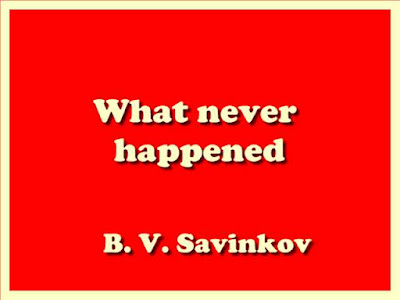 a novel of the revolution

From Preface by Alfred A. Knopf
When I first opened my office in the summer of 1915, and before I had actually issued a single book, I determined to publish an English translation of "Ropshin's" great novel of the Revolution, What Never Happened. But the time did not seem entirely opportune and so temporarily I put aside the project and for two years brought out in the Borzoi Russian Translation series works by Andreyev, Gorky, Sologub, Tolstoi and others which have been received with uncommon favour by the American reading public.
What Never Happened has, however, never been out of my mind for long — every now and again some enthusiast or other would call on me and suggest that I let him translate it for me. But arrangements were virtually made in June 1915, with Mr Thomas Seltzer, who first called the book to my attention before either of us had any knowledge as to the real identity of the author.
We all knew that "Ropshin" was a pen name and that his book, which created a great stir in Russia and even among the Russians in America, was so true to the facts of the terrorist existence that many of his fellow workers had condemned him for his frankness. Also that he had paid a fleeting visit to New York. More definite information about "Ropshin" no one seemed to have.
Then in March of this year came the Revolution and Note among those whose return to the fatherland it hastened was Boris Savinkov, a Russian who had been fighting with the French army in the West. This Savinkov was a terrorist of long-standing who, implicated in the assassination of the Grand Duke Sergius and Von Plehve, had been condemned to death at Sevastopol in 1906 but had escaped to Switzerland and thence to France.
He now hurried to Petrograd and was promptly sent to the front as head of the Commissary Department in General Kornilov's army. In August the great retreat commenced and he was called to the capital by Kerensky and appointed Minister of War. Boris Savinkov is "Ropshin" and What Never Hap- pened is thus the work of one of the most prominent men in Russia today. One need scarcely points out how thin the partition is which separates this literary production from the actual life lived by its distinguished author.
the book details :