Ginger talks -The talks of a sales manager to his men 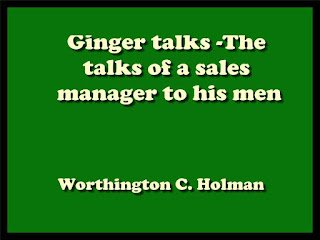 From preface:
There is gunpowder in every man if you can only get the spark to it. There is a latent power in every salesman — of- ten more than he himself dreams he possesses. All that is necessary is to light the flame of his enthusiasm by showing him his own opportunities and possibilities. Do but this much for him, and the hidden gun- powder within him will make him explode into sudden and irresistible action. "Ginger Talks" spark to reach the gun- powder.

To John H. Patterson, president of the Nation- al Cash Eegister Company, this book is dedicated, in recognition of his genius as a teacher and sales- manager and as a token of appreciation of the training the author himself formerly received in the sales and advertising departments of the National Company, and from two years of Mr Paterson's daily personal tuition in committee and directors' meetings.
W. C. Holman.

I wish to preach, not the doctrine of ignoble ease, but the doctrine of the strenuous life — the life of toil and effort, of labour and strife; to preach that highest form of success which comes, not to the man who desires mere easy peace, but to the man who does not shrink from danger, from hardship, or from bitter toil, and who out of these wins the splendid ultimate triumph.
— Theodore Roosevelt.

The salesman's personal force is an influence that emanates directly from his own unlimited belief in his proposition. It is the magnetic power of sheer earnestness. Sand in a hurry, please, gentlemen! We need it in no uncertain quantity on this toboggan slide we've struck. It's time to stop slipping back and begin to climb. A few more slumps like that of yesterday and we shall hit the bottom, with the quota for the month lost beyond recovery.
And we had so much faith in you at the start- off two weeks ago! We believed that when the month's returns were all in, the sales department would have to go up in a balloon to read your scores. That's where you fooled us. There has been nothing high this month except our hopes. We've been thinking it all over — hard. And now we want to say a few plain, helpful words to you. Let each man paste them in his hat, and wear them around until they strike through the top of his head and become a permanent part of his mental equipment.
A chief quality of a successful salesman is earnestness. The reason you are not selling more goods to merchants is that you haven't all sold yourselves yet. You've got to believe in your product yourself before you can make anyone else believe in it. It's no use to try to start a flame of enthusiasm in somebody else if your own mind is full of icy doubts.
Why did that man over on the avenue turn you down yesterday morning? Because he could tell by the look in your eye that you half expected him to do so. And the fellow you called on in the afternoon sized you up the same way. You didn't get anywhere near him. He listened to what you said — but it was with a cold and fishy eye. True, he nodded his head in assent as you talked — but two minutes after you started his mind was wandering. And when you came to put your finger on him at the end to get the order signed, he was like the Dutchman's famous flea — he wasn't there.
the book details : Download Ginger talk - The talks of a sales manager to his men - 8 MB PDF ebook