A prisoner of Trotsky's 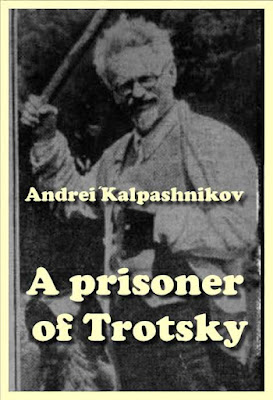 From the preface:
I have been asked by the author and by the publishers also to write a foreword for Colonel Kal- Metchnikoff's book— "A Prisoner of Trotsky's"— and as I am familiar with the occurrences resulting in his arrest and five months' imprisonment, have consented to do so. Colonel Kalpaschnikofif was in America when I arrived in Petrograd in April 1916; he was devouring lectures in this country and soliciting funds for the purchase of motor ambulances for the "Siberian Regiments American Ambulance Society," of which he was Commissioner-General.
He returned to Russia immediately after the first revolution and on the same vessel from which Leon Trotsky (Bronstein) was taken at Halifax, and did some interpreting in connection with the detention of Trotsky. Upon arriving in Petrograd, Kalpaschnikoff visited the American Embassy several times.
I remember receiving him on one or two occasions and also meeting him at several social functions. He told me that he had made an arrangement with the American Red Cross Mission to Rumania, of which Colonel Anderson of Virginia was the head, to transport to Jassy, the temporary capital of Rumania, seventy-two motor ambulances and eight light trucks en route from America.
This statement was confirmed later by Roger Griswold Perkins, connected with the American Red Cross Mission to Rumania when he came to Petrograd en route to America. On or about December 10, 1917, I received a telegram from Colonel Anderson at Jassy, sent through the American Minister at the Rumanian capital, in the code of the diplomatic service.
The telegram was a request from Colonel Anderson to advance to Kalpaschnikoff 100,000 rubles and draw on the Red Cross Organization in America for whatever portion of the 100,000 rubles Kalpaschnikoff requested.
There was another telegram addressed to Kal- Metchnikoff in care of the American Embassy, saying he should bring his automobiles to Rostov on Don. This telegram, which was also in code, was deciphered at the American Embassy and a paraphrase thereof sent to the headquarters of the American Red Cross Mission to Russia, which was located in Hotel d ' Europe. Kalpaschnikoff did not call at the Ameri- can Embassy until several days after the said telegram was received; I asked him if he had received the telegram and upon his replying in the negative, ordered that a copy of the paraphrase be given to him.
Only two copies of this paraphrase were ever made. The original is in the files of the American Embassy which have been moved to the State Department at Washington — one copy was delivered to the Ameri- can Red Cross Mission to Russia, of which Raymond Robins was at that time the chief, and the other copy was given to Kalpaschnikoff. - PDF by Andreí Kalpashnikov
Some contents:
FOREWORD ' . . . . vii
Introduction xiv
I, From Jassy to Petrograd 3
II. Before the Tempest 18
III. My Arrest 44
IV. Three Days Between Life and Death 59
V. A Glimpse at the History of the Fortress 84
VI. Kerensky in the Fortress .... 104
VII. Pavlov's Intrigues 118
VIII. A Gloomy Conversation and a TragicNight 135
the book details : Download A prisoner of Trotsky's  - PDF - 6.2 MB