Myths every child should know 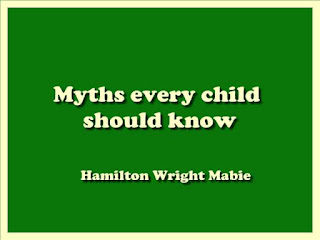 A SELECTION OF THE CLASSIC MYTHS OF ALL TIMES FOR YOUNG PEOPLE
In many parts of the country when the soil is disturbed arrowheads are found. Now, it is a great many years since arrowheads have been used, and they were never used by the people who own the land in which they appear or by their ancestors.
To explain the presence of these roughly cut pieces of stone we must recall the weapons with which the Indians fought when Englishmen, French- men, Dutchmen, and Spaniards first came to this part of the world.
There may be no authentic history of Indians in the particular locality in which these old-fashioned weapons come to light, but their presence in the ground is the best kind of evidence that Indians once lived on these fields or were in the habit of hunting over them. In many parts of the country, these arrowheads are turned up in great members; museums large and small are plentifully supplied with them, and they form part of the record of the men who once lived here, and of their ways of killing game and destroying their enemies.
Wherever there are arrowheads there have been Indians. Among every people and in every language there are found stories, superstitions, traditions, and phrases, which are not to be explained by the thoughts or ideas or beliefs of people now living; and the same stories, superstitions, and phrases are found among people as far apart as those of Norway and Australia.
The people of today tell these stories or remember the superstitions or use the phrases without understanding where they came from or what they meant when first used. As the ground in some sections is full of arrowheads that have been buried for no one knows how many centuries, so the poetry we read, the music we hear, and the stories told us when we are children, have come down from a time in the history of man so early that there are in many cases no other records or remains of it.
These stories vary greatly in detail; they fit every climate and wear the peculiar dress of every country, but it is easy to see that they are made up of the same materials and that they describe the same persons or ideas or things whether they are told in Greece or India or Norway or Brittany.
Wherever they are found they make it certain that they come from a very remote time and grew out of ideas or feelings and ways of looking at the world which a great many men shared in common in many places.
When a man sneezes, people still say in some countries, "God bless you." They do not know why they say it; they simply repeat what they heard older people say when they were children, and do not know that every time they use these words they recall the age when people believed that evil spirits could enter into a man and that when a man sneezed he expelled one of these spirits.
It is a very old and widely spread superstition that when a dog howls at night someone not far away is dying or will soon die. Many people are uncomfortable when they hear a dog howling after dark, not because they believe that dogs have any knowledge that death is present or coming, but because their ancestors for many centuries believed that the howling of a dog was ominous, and the habits of our ancestors leave deep traces in our natures.
Now, every time the melancholy howling of a dog at night makes a child uncomfortable, he recalls the old superstition which identified the roaring or wailing of the Introduction xi wind with a wolf or dog into which a god or demon had entered, with power to summon the spirits of men to follow him as he rushed along in the darkness.
In the old homes in the forests, thousands of years ago, children crowded about the open fire and trembled when a great blast shook the house, for fear that the gigantic beast who made the sound would call them and they would be compelled to follow him. We think of wind as air in motion; they thought of it as the breath and sound of some living creature. When we say that the wind "whistled in the keyhole," or "kissed the flowers," or "drove the clouds" before it, we are using poetically the language our forefathers used literally.
We speak of "the siren voice of pleasure," "the blow of fate," "the smile of fortune," and do not remember, often do not know, that we are recalling that remote past when people believed that there were Sirens on the coast of Crete whose voices were so sweet that sailors could not resist them and were drawn on to the rocks and drowned; that fate was a terrible, relentless, passionless person with supreme power over gods and men; that fortune was a being who smiled or frowned as men smile or frown, but whose smile meant prosperity and her frown disaster.
the book details :