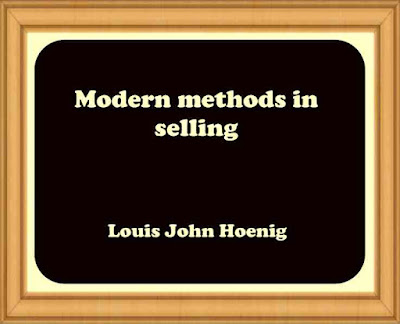 book for every man and woman in business

This work is written primarily for the salesman, or the man or woman who contemplates taking up selling work. I hope, however, that it may have some helpful suggestions as well for the sales manager, or the head of the house. It presents the problem of the one who sells either at wholesale or retail; of the salesman who calls on the trade or is called on by the trade, of the man who writes the sales letter, dresses the window or the display counter, or who writes the advertisements.
Each may have a different kind of work, but his problem is the same, — ^first, to get attention; each must have it. Then their problems run parallel in the effort to secure interest. There can be no selling without interest. Probably the work of each continues in the endeavour to secure desire which carries the necessary impulse to buy, and finally in obtaining the decision to buy, properly carried into effect. The travelling salesman carries his samples or his articles for demonstration.
This and his knowledge is his equipment. The salesperson in the retail store has the goods or articles in stock and Ms knowledge for his equipment.
The man who writes the sales letter has only his knowledge of the goods and of those who are expected to buy them. This knowledge and his letter are his equipment. And so with the advertising man; his knowledge and his copy are his equipment. Each has different equipment with which to work out the same problems.
Each depends on getting his message along certain pathways to the brain, the writer through the sense of sight, the personal sales- man through as many of the senses as possible. Studying these branches of selling in this associated way ought to give a broader idea of the science than could be obtained otherwise.
The different branches are treated as comprehensively as this single volume will permit, every important principle or practice being brought out. The usual amount of detail, much of which is often tiresome in works of this kind, is eliminated without sacrificing anything of consequence. Unless otherwise directed, we generally begin our study of selling inductively, reading only such works as pertaining immediately to our particular branch. Not until we have come into executive work do we realize, as a result of wider observation and experience, the importance of the study of all branches of selling as brought out in this work.
This general survey of the problems ought to give the salesman breadth and understanding which he could not get in the reading of any volume relating to his particular branch of the work. I hope that this discovery of the similarity in the problems of each branch will be an incentive to the reader to go into the individual branches still deeper, and eventually give him the knowledge that will serve him well in executive work.
the book details : Download Modern methods in selling - PDF - 5,6 MB