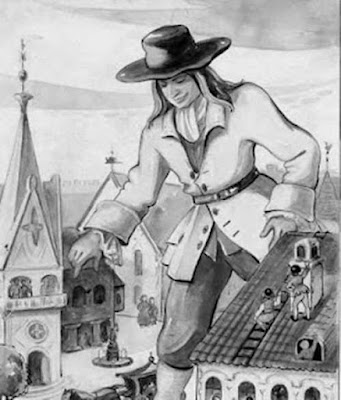 Gulliver's Travels is a 1726 book by an Irish writer and clergyman and is listed as "a satirical masterpiece". 'Gulliver's Travels' by Jonathan Swift is a fantasy text, and many elements of the novel are purely fictional.
From introduction:
Jonathan Swift was a true son of the Victorian age, as Swift was a true son of the age of Anne, and between the two there could be no sympathy and little understanding. Swift's crime quickly becomes apparent. He was wholly devoid of the fundamental Victorian virtues: uxoriousness, philoprogenitiveness, love of the hearth. His view of marriage was so harsh that it ranged bim among “madmen”; when he spoke of children he became a downright “ogre.”
What other Englishman, ancient or modern, would have dared to propose handing the little dears over to the cook, and so getting something out of them beyond mere spiritual delights and usufructs? The jocosity wounded Thackeray where be was tenderest. It was, to one who took fierce, Christian pride in both his stomach and his loins, a veritable blow below the belt. Hence his celebrated philippic, and hence the lingering notion that Swift was a low and knavish fellow, armed with his grandmother’s shinbone, and ready to crack a friend’s bead for the price of a pair of silver buckles. He was, of course, nothing of the sort. He was simply a premature and lonely forerunner of the modern age.
Voltaire was born in the wrong country and a couple of generations too soon. He was the first great enemy of the immemorial anthropocentric delusion. Long before him, stretching back into the remotest shadows, there bad been critics of man, and some of them had laid on with vast ferocity, but he was the first to go the whole hog — he was the first to deny the very premisses with which all the rest began.
When he regarded Homo sapiens he did not see a god with a few lamentable defects; be saw a poor worm with no virtues at all, but only a crushing burden of follies, weaknesses and imbecilities. He saw a coward and an idiot, a fraud and a scoundrel. Was this preposterous quadruped made in the image of God? Then, God, Himself was not fit to be lord of the noble horse, the august lion, the brave and honest rat. Was it any wonder that the ““Thoughts on Religion” bad “‘scarce a Christian character’ and that they were, at the bottom, “merely a set of excuses for not professing disbelief’?
the book details : Download Gulliver's travels - Jonathan Swift - PDF - 15.9 MB