Elements of style in furniture and woodwork 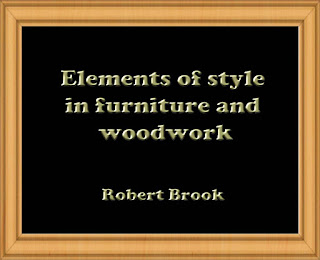 being a series of details of the Italian, German Renaissance, Elizabethan, Louis XIVth, Louis XVth, Louis XVIth, Sheraton, Adams, Empire, Chinese, Japanese, and Moresque styles ... for the use of architects, furniture designers, cabinet makers and others
although many books have been published with a view to illustrating various phases of Art manufacture, I am not acquainted with an}' work which presents in a concise form the characteristic details of the different styles of domestic furniture. Feeling myself, the want of such an easily accessible hand-book, and believing that it will be equally useful to many others, both designers and manufacturers, I have endeavoured in the following series of sketches, in some measure to supply the deficiency.
It is, of course, impossible in a work of moderate dimensions, to give more than a selection from each period. I have, therefore, only chosen those examples which I have thought to be typical or suggestive, and likely to be of practical value to designers, avoiding any which possess only an antiquarian interest.
The importance of a knowledge of style being universally admitted, no apology need, I think, be offered for the publication of these drawings. They are intended chiefly for the use of those who, either from lack of time or opportunity, are prevented from consulting the numerous old authorities in woodwork, or examining the original specimens contained in our art galleries and museums.
The enlarged details of mouldings, carvings, iron and brass mounts, should also be serviceable to manufacturers who wish to reproduce cabinet work in any particular style. As regards the relative merits of the various schools of design represented in the following pages, each one must judge for himself; there being no fixed laws by which to decide matters of taste.
There are a few styles which do not contain some elements worthy of imitation^ and most of them offer valuable suggestions to the designer. At no period in the world's history has a knowledge of the decorative and constructive Arts as practised by various nations, been so universal as it is at present.
One result of this spread of information is, that we have no prevailing style of our own, but reproductions of the works of all ages and countries, modified to suit modern requirements. Some draw their inspirations from Gothic forms, others are guided by Classic models, and others again prefer to adopt one of the many varieties of Oriental Art. With this diversity of taste, a national style is impossible, nor can we hope for any great perfection when the energies of our architects and designers are distributed over such a wide field of study.
This was not the case in the great Art periods of former times when the talents of many generations of Art-workers were combined for the perfection of a single style. A fickle public now demands something " fresh " every few years, and change in fashion in architecture and furniture is almost as rapid as a change of fashion in dress.
The chief aim of the Ancients was to improve on existing types, and not to produce novel effects, and it is to this unity of purpose we may attribute all the great works of antiquity — the Grecian Temples and Gothic Cathedrals, the models from which all subsequent European styles have sprung, and on which all future variations must be founded. But although we cannot hope to improve on the proportions of the antique, or excel it in the purity of design, we can at least avoid those incongruities which characterise the most debased periods of Art, by obtaining as much knowledge as possible of the styles in which we wish to work and noticing the peculiarities by which the productions of every age and country are distinguished. All good authorities are of opinion that an acquaintance with the works of the great masters in Architecture and Design is advantageous, in fact essential, to those who wish to adopt either of the above professions.
As Owen Jones truly remarks in his preface to the Grammar of Ornament, "To attempt to build up theories of Art or to form a style independently of the past, would be an act of supreme folly. It would be at once to reject the accumulated knowledge of thousands of years." At the same time we should not slavishly copy old examples, but examine them with the object of discovering the methods which their originators adopted, and use them as " motifs " on which to graft original thought.
the book details :