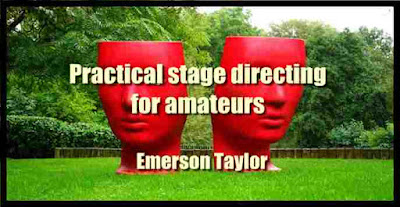 Until comparatively recently, the production and performance of plays by amateurs have been judged by the least exacting standards. Charity spread her mantle wide over shortcomings which were somehow considered inevitable; and, conversely, there was very little effort on the part of those engaged in the performance to accomplish any very ambitious purpose. Critics were scrupulously careful to remember every single actor in their generously glowing tributes; the audience was always willing to express the conviction 2 Amateur Stage Directing that "after all, amateur plays do have a chain of then- own, so different from real plays," — and meant nothing equivocal.
It is perfectly true, as we aU know, that a kind of pleasant interest did attach to these friendly gatherings. They were in their way capital firm. But lately, we have come to believe, and probably with good reason, that there is a whole lot more to be got out of amateur performances which are organized, played and judged in a rather different and more exacting spirit. As a growing element in our theatre-going population is demanding (and getting, pace the croakers!) a better class of plays, something of the same element is asking for improvement in taste and execution in amateur pro- ductions. What has happened in the case of the amateur musician is now happen- ing in the case of the amateur* actor. He must do better.
And responding to demand — ^if one can so name that which is no more than an indefinite but insistent feeling — ^the actor has formed that he has gained in every way. If amateur players aim as high as they can; if they work hard to give a performance which modestly asks to be judged by professional standards; if they try to get all the values possible out of the play; if, instead of merely reading lines, they make a real attempt — ^with what light they have — ^to impersonate character, we think there is a great gain all round. Not only is it more fun, but there is also a marked and permanent ad- Vance in accepted standards.
Not only are rehearsals more interesting, when they are made the occasion of intelligent study, but they are a whole lot more amusing than those of the older type. One would probably disclaim immediately and with sincerity when advocating higher standards, any desire to make acting one of the pleasures which we Americans are accused of taking sadly. But in chosen lines, something in us makes us want to excel; and if this feeling has come in these days to colour the aspirations of those who find entertainment in acting, we can only accept what is an accomplished fact, and help a little to make the best of it.
Perhaps, even, the educators are all wrong in behaving that the general instinct for self-expression, as it finds its outlet by means of the stage, should be carefully nurtured and developed. It may be that the schools, with their pageants and their carefully trained dramatics, are wasting time terribly. But, after all, we appear committed to the experiment; no class is taking the drama with such seriousness as the teachers. And since no experiment is worth anything at all unless it is performed thoroughly and with all the resources of the Introductory 5 laboratory, it is well for us to help the teachers and the investigators with all we can.
If the steadily growing and spreading interest in the drama both as fine art, a civic asset, a source of intelligent entertainment, and a force in education, results in a general raising of our critical standards and an intensifying of our sym- pathetic appreciation, what vast goodwill be accomphshed! And, confident that the performance of plays by amateurs is one of the very best means of quickening their perceptions of the play's dramatic and artistic values, we applaud wholeheartedly any attempt to "give a good show."
the book details : Download Practical stage directing for amateurs - 2.9 MB