The theory of the relativity of motion 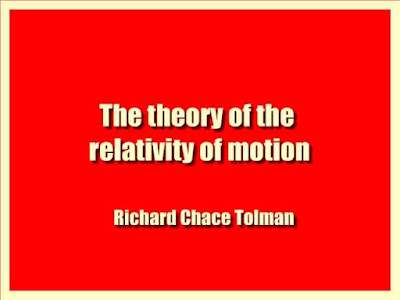 From preface:
Thirty or forty years ago, in the field of physical science, there was a widespread feeling that the days of adventurous discovery had passed forever, and the conservative physicist was only too happy to devote his life to the measurement of the sixth decimal place of quantities whose significance for physical theory was already an old story.
The passage of time, however, has completely upset such bourgeois ideas as to the state of physical science, through the discovery of some most extraordinary experimental facts and the development of very fundamental theories for their explanation.
the experimental side, the intervening years have seen the discovery of radioactivity, the exhaustive study of the conduction of electricity through gases, the accompanying discoveries of cathode, canal and X-rays, the isolation of the electron, the study of the distribution of energy in the hohlraum, and the final failure of all attempts to detect the earth's motion through the supposititious ether.
During this same time, the theoretical physicist has been working hand in hand with the experimenter endeavouring to correlate the facts already discovered and to point the way to further research.
The theoretical achievements, which have been found particularly helpful in performing these functions of explanation and prediction, have been the development of the modern theory of electrons, the application of thermodynamic and statistical reasoning to the phenomena of radiation, and the development of Einstein's brilliant theory of the relativity of motion.
It has been the endeavour of the following book to present an introduction to this theory of relativity, in the decade since the publication of Einstein's first paper in 1905 {Annalen der Physik) has become a necessary part of the theoretical equipment of every physicist.
Even if we regard Einstein's theory of relativity merely as a convenient tool for the prediction of electromagnetic and optical phenomena, its importance to the physicist is very great, not only because its introduction greatly simplifies the deduction of many theorems which were already familiar in the older theories based on a stationary ether, but also because it leads simply and directly to correct conclusions in the case of such experiments as those of Michelson and Morley,
Trouton and Noble, and Kaufman and Bucherer, can be made to agree with the idea of a stationary ether only by the introduction of complicated and ad hoc assumptions. Regarded from a more philosophical point of view, an acceptance of Einstein's theory of relativity shows us the advisability of completely remodelling some of our most fundamental ideas. In particular, we shall now do well to change our concepts of space and time in such a way as to give up the old idea of their complete independence, a notion which we have received as the inheritance of a long ancestral experience with bodies moving with slow velocities, but which no longer proves pragmatic when we deal with velocities approaching that of light.
Some contents:
Transformation Equations for Acceleration 48
Chapter V. Kinematical Applications 49
The Kinematical Shape of a Rigid Body 49
The Kinematical Rate of a Clock 50
The Idea of Simultaneity 51
The Composition of Velocities 52
The Case of Parallel Velocities 52
Composition of Velocities in General 53
Velocities Greater than that of Light 54
Applications to Optical Problems 56
The Doppler Effect 57
The Aberration of Light 59
The velocity of Light in Moving Media 60
Group Velocity 61
Chapter VI. The Dynamics of a Particle 62
The Laws of Motion 62
Difference between Newtonian and Relativity Mechanics 62
The Mass of a Moving Particle 63
Transverse Collision 63
Mass the Same in all Directions 66
Longitudinal Collision 67
Collision of any Type 68
Transformation Equations for' Mass 72
The Force Acting on a Moving Particle 73
Transformation Equations for Force 73
The Relation between Force and Acceleration 74
Transverse and Longitudinal Acceleration 76
The Force Exerted by a Moving Charge 77
The Field around a Moving Charge 79
Application to a Specific Problem 80
Work 81
Kinetic Energy 81
Potential Energy 82
The Relation between Mass and Energy 83
Application to a Specific Problem 85
Chapter VII. The D3mamic8 of a System of Particles 88
On the Nature of a System of Particles 88
The Conservation of Momentum 89
the book details : Download The theory of the relativity of motion  - 4.8 MB