Learn to Hypnotise and Cure 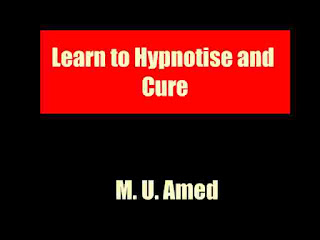 From introduction:
This book attempts to vindicate the scientific status of Hypnotism by advancing a mystical-spiritual interpretation of the phenomenon of ‘hypnosis’ in terms of ‘Dhyana’ as against the materialistic theories of Occidental Hypnotism. I have ventured to coin a new word, viz, ‘Medium’ as a better substitute for the old word ‘Hypnotism’ for representing the standpoint of what may be called ‘Neo-oriental Hypnotism’.
But as the word ‘Medium’ is altogether new and unfamiliar to the public, I thought it desirable to use indifferently either the words ‘Medium’ or ‘Hypnotism’ for representing the same phenomenon. I crave the indulgence of the readers of this book for this attitude of mine.
Hypnotism is a new name, not a new thing. It was in vogue amongst the saints and the sages of the bygone days. Perhaps it was mainly due to their supernatural explanation that the practice of Hypnotism gradually got relegated to the region of the black art of magic. Even today people are vety much afraid of the practice.
They believe that Hypnotism is a dangerous art by practising a man can control the evil spirits. It is primarily with a view to allaying such misconcep¬ions that I have been led to defend the mystical- spiritual nature of Hypnotism.
The book consists of ten Lectures which have been so arranged that any layman can become a master hypnotist within a very short time with¬ out requiring any help from experts. It starts with an exposition of the various methods for the development of Personal Magnetism and Will power, which constitute the essential pre-requi¬ sites for the practice of Hypnotism.
Then after offering an altogether new interpretation of ‘Suggestion’ and ‘Passes’, it gives a very detailed explanation of the various occidental methods for inducing ‘hypnosis’.
Here I have taken the liberty of delineating my method which I call ‘The Neooriental method of Medism’. The book is self-explanatory and it should prove to be a valuable aid to both the theoretical and the practical stu¬ dents of Hypnotism.
The present work of mine is the result of my incessant experiment on Hypnotism which I have been carrying out for the last fifteen years.
the book details : Download Learn to Hypnotise and Cure - PDF 7.4  MB