An introduction to philosophy 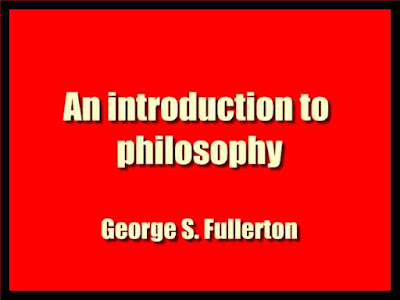 From introduction:
As there cannot be said to be a beaten path in philosophy, and as " Introductions " to the subject differ widely from one another, it is proper that I should give an indication of the scope of the present volume. It undertakes
1. To point out what the word "philosophy" is made to cover in our universities and colleges at the present day, and to show why it is given this meaning.
2. To explain the nature of reflective or philosophical thinking, and to show how it differs from common thought and from science.
3. To give a general view of the main problems with which philosophers have felt called upon to deal.
4. To give an account of some of the more important types of philosophical doctrine which have arisen out of the consideration of such problems.
5. To indicate the relation of philosophy to the so-called philosophical sciences, and to the other sciences.
6. To show, finally, that the study of philosophy is of value to us all, and to give some practical admonitions on spirit and method. Had these admonitions? been impressed upon me at a time when I was in special need of guidance, I feel that they would have spared me no little anxiety and confusion of mind. For this reason, I recommend them to the attention of the reader. Such is the scope of my book. It aims to tell what philosophy is.
It is not its chief object to advocate a particular type of doctrine. At the same time, as it is impossible to treat the problems of philosophy except from some point vi Preface of view, it will be found that in Chapters III to XI, a doc- trine is presented. It is the same as that presented much more in detail, and with a greater wealth of reference, in my " System of Metaphysics," which was published a short time ago. In the Notes at the back of this volume, the reader will find references to those parts of the larger work which treat the subjects more briefly discussed here.
It will be helpful to the teacher to keep the larger work on hand, and to use more or less of the material there presented as his undergraduate classes discuss the chapters of this one. Other references are also given in the Notes, and it may be profitable to direct the attention of students to them.
The present book has been made as clear and simple as possible, so that no unnecessary difficulties may be placed in the path of those who enter upon the thorny road of philosophical reflection. The subjects treated are deep enough to demand the serious attention of anyone, and they are subjects of fascinating interest.
That they are treated simply and clearly does not mean that they are treated superficially. Indeed, when a doctrine is presented in outline and in a brief and simple statement, its meaning may be more readily apparent than when it is treated more exhaustively.
For this reason, I especially recommend, even to those who are well acquainted with philosophy, the account of the external world contained in Chapter IV. For the doctrine, I advocate I am inclined to ask special consideration on the ground that it is, on the whole, a justification of the attitude taken by the plain man toward the world in which he finds himself.
The experience of the race is not a thing that we may treat lightly. Thus, it is maintained that there is a real external world presented in our experience — not a world which we have a right to regard as the sensations or ideas of any mind. It is maintained that we have evidence that there are minds in certain relations to that world and that we can, within Preface vii certain limits, determine these relations. It is pointed out that the plain man's belief in the activity of his mind and his notion of the significance of purposes and ends are not without justification.
It is indicated that theism is a reasonable doctrine, and it is held that the human will is free in the only proper sense of the word "freedom." Throughout it is taken for granted that the philosopher has no private system of weights and measures, but must reason as other men reason, and must prove his conclusions in the same sober way. I have written in hopes that the book may be of use to undergraduate students.
They are often repelled by philosophy, and I cannot but think that this is in part due to the dry and abstract form in which philosophers have too often seen fit to express their thoughts. The same thoughts can be set forth in plain language, and their significance is illustrated by a constant reference to experiences which we all have — experiences which must serve as the foundation to every theory of the mind and the world worthy of serious consideration. But there are many persons who cannot attend formal courses of instruction, and who, nevertheless, are interested in philosophy.
These, also, I have had in mind; and I have tried to be so clear that they could read the work with profit in the absence of a teacher.
the book details : Download An introduction to philosophy  - PDF ebook -- 6.8 MB