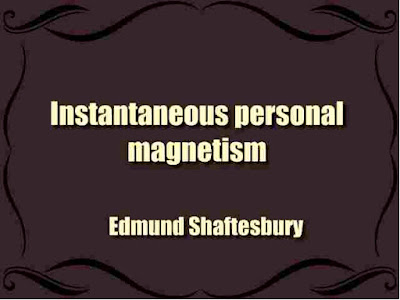 combining an absolutely new method with the best-established teachings of the past; now the standard work of the Magnetism Club of America
Presentation of the causes and progress that have become history in the unfolding of any great movement that has lent itself to the betterment of mankind, is always a source of encouragement and inspiration to a newer generation.
To this end, we will briefly review the important facts that have been interwoven in the development of the Magnetism Club of America. Edmund Shaftesbury today is known to about four million men and women who are studying his works; yet in the forty- five years or more that he has been a teacher, he has refused to advertise his productions; and it is only at the present time that the publishers who now control his writings have undertaken to invite a larger following by public advertisements.
His four million students came from the friends and acquaintances of those who had become students in the same way and who had mentioned these works and spoken of their merits to others. As one instance out of many, a person who owned a copy of this book of Personal Magnetism and who was spending a few weeks at a fashionable summer hotel left the book on a table for a few days while temporarily absent, and learned that nearly four hundred other guests had obtained the address of the publishers, and had ordered the book.
In another case, a physician kept a copy on the table in his waiting room, and in the course of time, more than two hundred of his patrons procured the address and ordered copies for themselves. It is gratifying and also encouraging to prospective students and to those who are about to begin this study, to know that the book itself s magnetic!
A very capable, smart, successful but strictly honest business man who was told that this system was in itself full of magnetism, refused to believe the claim, and said, "I will pay five hundred dollars to the author if he can induce me to buy the book." —
The following questions were put to this merchant: 8 Instantaneous Personal Magnetism "Will you decide the matter as an honest man without any quibble?"— "Yes."— "Will you take time to read the book carefully?" — "Yes." — "If after reading it, you find that its value to you is fully a thousand times more than its cost, will you then buy it?" — "Yes." — In a short time a check for five hundred dollars was his answer.
It is not only encouraging but gratifying to the coming students to know that the book has a most positive and powerful magnetic influence over the lives of those who read or who study its pages. And this influence is ennobling, uplifting and inspiring. \
Edmund Shaftesbury when engaged in his first literary duties as a reporter for a great daily, a correspondent for others, writer for magazines, and author of scientific treatises, as well as teacher and lecturer along these lines all of which harmonized in the plan he had in mind, was brought in contact with many great personages and had the opportunity for analyzing the causes of their greatness. No man that ever lived possessed a keener insight into the problems of life; and we have never heard of any person who was gifted with so great an analytical power of the causes, natural and acquired, that produced the successful people of the world.
He compiled for his own use in experimentation and study, private biographies of more than one hundred of the greatest men and women of two generations ago, all personally acquired by actual contact with these people. A few only of these names will be mentioned here, and among them will be included some who were either close friends or students or endorsers of the training systems created by Shaftesbury
These names are published for The sole purpose of giving encouragement to new pupils and of arousing in them the latent impulses of ambition to aim high in the purposes of life in the belief that noble examples are truer guides than the allurements of unfulfilled hopes.
Previously published under titles: Personal magnetism club of America and Cultivation of personal magnetism