Happiness as found in forethought minus fearthought 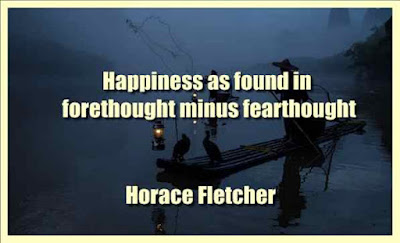 " Happiness" was written in answer to many questions elicited by the publication of " Menticulture." The " Introduction " is not material to the subject except to show the sources of the suggestions relative to profitable living contained in the two books.
The vital truths underlying the philosophy of life can be intelligently stated in a few hundred words, both as regards the proper cultivation of the body, or physical equipment, and as regards the cultivation of the mind, so that they may do the best work of which they are capable. False example and false teaching.  however, have so impressed habits of weakness on the body and the mind that the chief aim of curative suggestion should be to disabuse.
That is, to cause people to discard bad habits of thinking and doing in order that normal, healthy- tendencies of action and of thought may take their place. The difficulty of the task undertaken by any student and advocate of reform is not the intelligent statement of the simple truth, but the discovery and refutation of a complication of errors which have assumed the reality of truth. Simile and illustration, some logic and much ridicule, are among the weapons that have been effective in combating old habits of wrong thinking, but it is im- possible to say which argument will fit a particular case. Each of the illustrations used in this book has been the means of curing someone person of some phase of fear- thought, and together they have released many from that dread enemy of health and happiness called "Fear."
The normal condition of Nature is healthy growth — evolution or progression — and Man's chief function in assisting her is first the removal of weeds or other deterrents to the natural process, and afterwards the maintaining of quarantine against their return. True Happiness is the Evidence and Fruit of Conscious Usefulness. The wider the opportunity for usefulness the greater and keener the happiness resulting therefrom. Conscious- ness of bein^ one's best and doing one's best, however, regardless of scope, is the only way to unalloyed happiness, and the accomplishment of the highest ideals.
There can be no more miserable, sorry and harrowing condition than that called " Indifference." The separation of fear thought from forethought is not alone valuable because of the personal comfort of being fearless, but it is especially useful in that the energy made possible by the divorce is available in assisting others to be strong and helpful to themselves and to each other. If attention is once directed to the pulling of weeds, to the removal of deterrents, to the eradication of the germs of disorder, the pursuit will become most fascinating, owing to the quick and happy response of Nature in her willingness to "Do the rest."
Contents:
Introduction, 7
Hypothesis, 29
Theory, 38
Prefatory Definitions, - - • 43
The Value of Simile, - - - - 63
Analysis of Fear, .... 69
Baleful Effects of Fear, - - - 78
How to Eliminate Fear, - • - 89
How to Cure Special Forms of Fear, 100
The Now -Field, 109
Pertinent Pages, - - - - 117
Stop Importing, or. Eradication versus
Repression, 145
The Impotence of Pain, - - . 153
Unhappy Unless Miserable, - - - 160
Thou Shalt Not Strike a Woman, - 169
The Point-of-View, - - - - 177
Don 't Be a Sewer, - . . - 187
Call Suspicion a Liar, - - - j- 190
I Can't Not Do It, - - - . 192
A Million to One on the Unexpected, 198
Love Cannot be Qualified, - - 203
Last Sometimes First, - - - 211
A Beginning and Not an End, - - 217
Appendix A — Dr. Wm. H. Holcomb, 223
Appendix B — George Kennan, - 242
Explanation of the A. B. C. Series, - - 253
the book details : Download Happiness as found in forethought minus fearthought- 3.3 MB