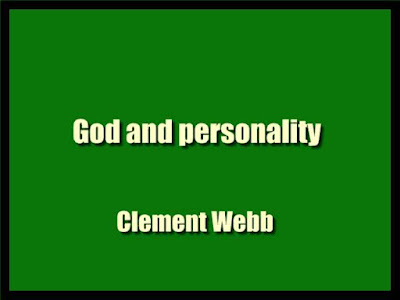 Excerpt:
Our subject is to be Personality and especially the place to be assigned to it in our conception of God. Individuality, but not Personality, has already been treated by Gifford Lecturers. The distinction is illustrated by the difference of view between Lotze and Mr Bosanquet, the former attributing Personality, the latter denying Personality but attributing IndividuaUty to the Absolute. Personality in God to be discussed before Personality in man. This order of treatment depended on grounds historical and philosophical.
The problem of Personality indicated by Dr Merz is that to which we are invited by the course taken on the history of thought during the last half-century. Embarrassment alike of the scientific and the philosophical movements of this period in the presence of this problem; which has also been raised for many in an acute manner by the present war.
The fact that the history of the notion of Personality will compel us to deal with the theological doctrines of Christianity suggests a digression on the attitude to be adopted in these Lectures towards those doctrines. Programme of the following Lectures.
However, as we have seen, the expression ' a personal God ' is now often used without any thought of admitting a plurality of beings within the Divine Nature standing to one another in personal relations, whether after the manner of polytheism, wherein they are thought of merely as sharing in the Divine Nature just as all of us here share in the human, or after the manner of Catholic Christianity, in which the mutual unity of the three Divine Persons is of course regarded as of an infinitely closer and more intimate kind.
When, however, the expression a ' personal God ' is thus used, without reference to any plurality within the unity of the Divine Nature, what is really in the minds of those who so use it is, I think, always the possibility of personal relations — of worship, trust, love — between oneself and God. Now here again, so far from Spinoza denying the possibility of anything of this kind.
the book details : Download God and personality - PDF ebook- 6.5 MB