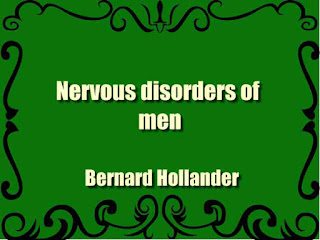 This book treats the numerous nervous illnesses of men, in which the mental factor plays a large part, and which are known as functional disorders, to distinguish them from organic diseases. Until recently patients suffering from these disorders were not taken seriously, and their treatment is still left largely to men outside the profession.
These are the patients who are attracted by patent medicine advertisements and by the numerous lay practitioners specialising in one form of treatment: electricity, massage, physical exercise, diet treatment, or other specific; or who have faith in " Christian Science," " Higher Thought," and other cults, and seek the treatment of " mental healers."
Now, however, that research into the functional disorders of the nervous system is carried on with the same zeal as into the organic dis-orders by physicians, eminent also as psychologists, and medical men are paying more and more attention to psychotherapy, there can be no longer any excuse for people exposing themselves to the dangers of treatment by unqualified persons.
On the other hand, functional disorders occur more in private than in hospital practice, and there is no systematic instruction in psychotherapy except in one or two of our Institutions, it is not only the lay public that has vague notions of this subject but there must be also a large number of medical practitioners who lack the experience of its practical application and would like to learn what can be done by this mode of treatment for the benefit of the nervous sufferer.
To them I address this book, not as a textbook, but rather as a series of essays on the various disorders of the nervous system, giving my personal observations and reflections, the result of long experience, and dwelling more especially on the mental causes and effects, and the counsels and treatment which I have found the most successful.
The book, being written in non-technical language and containing wholesome advice, should appeal also to those who have the care for nerve patients, and to other lay readers desirous of practical and useful information on the subject of nervous disorders.
I am aware, of course, that every health teacher is confronted with the danger that his hygienic enlightenment may be sought by patients who are already dwelling too much on their troubles; but even these, I hope, may read the book with advantage, learning how nervous disorders may be caused and aggravated by unhealthy mental habits and profiting by the directions given for the acquisition of self-control.
This volume is limited to the discussion of nervous disorders peculiar to men and is a companion volume to one on Nervous Disorders of Women. Of course, many of the complaints are common to both men and women, but their causation and to some extent their treatment is different in the two sexes and justify the description being given in separate volumes.
the book details : Download Nervous disorders of men - 4.3 MB