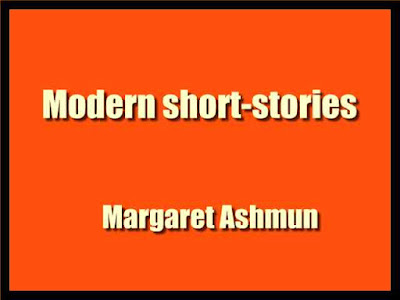 This book contains some of the greatest short stories by famous authors. the stories edited and collected by Margaret Ashmun

From preface:
In the compilation of this volume,, two purposes have been kept in mind. First, the aim of the editor has been to provide, for the general reader and for collie students, in particular, a group of modern short- stories of intrinsic value, to be studied for their content and for their significance in relation to modern art. In other words, the book is intended to supply material for an academic or literary study of the short- story.!
Secondly, and perhaps more directly, the volume is planned to furnish examples for analysis by classes in short"Story writing. In the broad sense, it is a collection of models that may be used as a basis f^r college courses in narration.
There was a time, not very long ago when the short story was regarded as an inferior form of literary art. It was pleasant and entertaining, to be sure, but scarcely worthy of a master's hand. The critic,: content to give it a passing word, saw no necessity of awarding it the careful study and the definite reduction to the principle that other forms of fiction merited. Of late, however, the short story has come into its own. One has only to run through a literary index or the catalogue of any good library, to see what a mass of commentary has been produced relating to this distinctly modern type of narrative. Mr Brander Matthews
The Philosophy of the Short-story, published in 1885 was one of the first to recognize the dignity of the short story and to formulate the principles which underlie its material and structure. l culture.