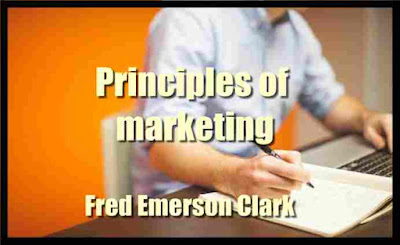 From introduction:
The purpose of this book is to treat the nature of the marketing process, view the market structure as a whole and analyse marketing problems and the devices used in solving them. In doing this I have tried to discuss the most fundamental of the problems and principles involved.
Descriptive material has been used when it seemed essential to the illustration of principles, and economic theory has been introduced wherever it would promote the discussion of particular points. The form of treatment is functional. But sufficient informational material has been introduced, early in the book, to give a background from which to develop the functional approach. With this, in view, the first two chapters discuss the general nature of marketing and introduce the marketing functions. Chapters III-V discuss the problems, methods, and machinery used in marketing farm products. Chapter VI treats the marketing of raw materials.
Since many of the problems found in marketing raw materials are similar to those involved in marketing farm products, the treatment here is from the buyer rather than from the selling point of view. In the four chapters which follow, the marketing of manufactured products is discussed. Two chapters are then devoted to retailing and one to cooperative distribution. Chapter XIV serves a double purpose.
It is discussed the general topic of the elimination of middlemen, and at the same time, it serves indirectly as a convenient summary of previous chapters.
This summarization prepares the reader for the discussion of the specific functions and problems which comprises the remainder of the book. This method of presentation is a development of several years' experience in teaching marketing. First used as lecture notes, these chapters have been revised from time to time and for the past four years have been used in mimeographed form in my own classes and by instructors in a few other large universities.
Because the conditions under which marketing courses are given in colleges and universities are so various that no one form of presentation is likely to prove adapted to all needs, ample cross-references are used and some repetition is indulged in. The rather copious footnote references of the earlier mimeographed editions have been largely retained. Such specific references seem to serve better as a basis for collateral reading and class reports, and as a source for lecture material, than do more general bibliographies.
Marketing consists of those efforts which affect transfers in the ownership of goods and care for their physical distribution. The need for marketing grows out of the division of labour, particularly as manifested in large scale production and in the localization of industry.
This division of labour, in turn, is due to the diversity of human wants — a diversity that arises not merely from the demand for the prime necessities of life, but from that far greater number of acquired wants that result from the seemingly limitless possibilities for human beings to expand and develop their desires. Different Interests.
Marketing is engaged by the producer, the consumer, and certain specialized agencies including those commonly called middlemen. To each of these, marketing appears in a different light: to the farmer, lumberman, fisherman, miner, or manufacturer, it affords a means of dis- posing his surplus products and of purchasing the materials, equipment, and supplies necessary for production; to the consumer, it affords a means through which desired commodities are made available; to the middleman and other market specialists, it affords a source of business income.
The attitude of each of the three groups involved in marketing must be understood before the subject can be intelligently approached. The producer is interested in marketing since it affords the means through which he can sell his product. He wishes to sell for as much as possible.
The consumer, on the other hand, desires to stretch his income as far as possible. He wants to buy for as little as he can. Purely as a consumer or as a producer neither has a particularly altruistic attitude toward the other.
Thus, when the prices of farm products rise the farmer r juices and the consumer feels aggrieved, but when the prices of farm products fall the farmer grieves and the consumer re- juices.
Finally, just as the interest of the producer is to sell at the price which will bring him the largest ultimate profit, and just as the interest of the consumer is to buy at that price which will make his income go farthest, so the interest of the middleman and the other specialists of the market is to sell their service, the marketing of products, for the highest net return. It is evident, then, that the market process involves interests that conflict.
But since no one is in all his relations to the market always in a single class, his interests differ from time to time. Each individual is likely to be in at least two of these classes since most people buy and sell. When purchasing goods for consumption, or for use in production, each has the point of view of the consumer; when selling his services or his product, each has the point of view of the producer.
the book details : Download Principles of marketing  13.9 MB