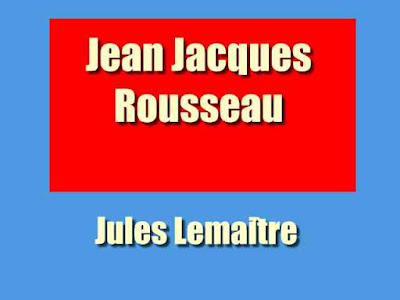 From the author's introduction
At the risk of being once more accused of impressionistic, personal, and subjective criticism, I must make an avowal. When I chose Jean-Jacques Rousseau as the subject of this course, it was not, at first, from any feeling of extreme kindliness toward the citizen of Geneva. And yet, in past days, when I nourished more illusions than I do now, I greatly loved him. But I have had experiences, and have looked closely at realities seen formerly only from afar; I have touched as with the hand the consequences of certain ideas dear to Rousseau.
And that is why, when I promised to speak of Jean-Jacques, I purposed especially to study in him the father of some of the greatest errors of the eighteenth and nineteenth centuries. The first thing to be done was to re-read him, or (let us be sincere) to read him seriously and completely. Then there happened to be something unforeseen.
While in this long perusal I sought for reasons to condemn him, — and oh! I found such in great abundance, —I felt at the same time, and very keenly, how those ideas had come to him, by what fatality of temperament and circumstances, as the consequence of what reminiscences, of what deceptions, of what regrets, even of what re- morse.
Then, what there was in him of candour and sincere piety touched me in spite of myself: and I recognized anew that this man, from whom one may think so many public ills had sprung (unwittingly to himself, it is true, and especially after his death) had no doubt been a sinner, and finally a madman, but in no way a bad man, and that, above all, he had been most unhappy. And then, his was so singular a case! He is unique, even in our literature, and, I believe, in the literature of the world
This vagrant, this sluggard, this self-taught man who, after thirty years of idle musings, dropped one day into the midst of the brilliant Paris of the eighteenth century, where he seemed a veritable savage, but a real savage, very much more interesting than the one Voltaire painted; who began to publish toward his fortieth year; who in the space of ten years, in the midst of almost incessant physical suffering, wrote three or four books — which are not particularly strong nor rare as to thought, but show a new way of thinking and a sort of vibration unknown till then; who then sank into a slow kind of madness — and who, by those three or four books, caused, after his death, literature and history to be transformed and the hfe of a people, to whom he did not belong, to deviate: what a prodigious feat to accomplish
First. — I may have been mistaken as to certain facts. This is not a " critical biography " of Rousseau: my chief object has been the history of his sentiments. Second— These are but lectures. In them I have, above all, endeavoured to be simple and clear; and the tone is generally that of a somewhat careful conversation.
Contents:
I. The First Six Books of the "Confessions" ... 1
II. Rousseau in Paris . . . Therese .  35
III. Discours sur Les Sciences et lies Arts — The Moral Reform of Rousseau 71
IV. Discoiu's sur L'Inegalite— Rousseau at the Hermitage 107
v. Lettre sur Les Spectacles — Rousseau at Montmorency 143
VI. The "Nouvelle Heloise" . .' 179
VII. Emile .... 215
VIII. The "Contrat Social"— The "Profession de Foi duVicaire Savoyard" . . . 253
IX. The "Lettre a-L'Archeveque de Paris "—The "Lettres de La Montague " — Last Years of Rousseau — The Dialogues ... 293
X. The Reveries — Recapitulation and Conclusions. 333
the book details :
Download Jean Jacques Rousseau 6.6 MB