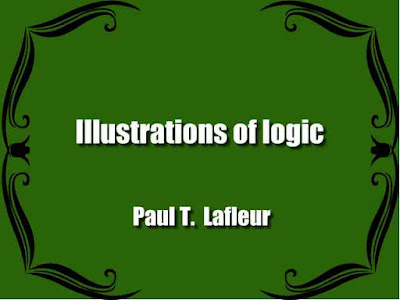 Excerpt from the preface :
In the following collection, illustrating fundamental processes of Deductive Logic, with examples taken from general literature, the compiler has had in view, primarily, the needs of teachers of the subject.
Many of the manuals in common use present those processes (particularly the syllogism) in the form of what Dr Venn aptly terms "prepared material"; and the instructor consequently finds difficulty in convincing his hearers that the logic of the classroom bears any relation to thought as met with in ordinary discussion and in books.
Thus, without attempting a comprehensive treatment of "rhetorical logic" such as Jevons had in view, but unfortunately did not live to carry out, it yet seems possible to offer a little volume that may serve some purpose as an adjunct to any well-known handbook — not in any sense as a substitute.
Should a timorous objection be urged that several of the specimens selected involve questions quae in sermone et opinione positae sunt, as Bacon puts it, the reply is that the student also has been kept in mind. In the present writer's experience the timely introduction of a syllogism of controversial, or even of polemical interest has often proved the only means of relieving the undeniable tedium of rigorously conventional Formal Logic; it rests with the lecturer himself not to use his subject as a vehicle for slyly conveying or enforcing his private convictions.
Some explanation is. needed of the fact that this collection begins at once with the syllogism. It is true that, in discussing Terms and Propositions, some of the processes admit to tolerably easy literary illustration.
For example, to take but one instance, the common fallacy of applying simple conversion to the universal affirmative proposition
the book details : Download Illustrations of logic  - PDF ebook - 2.5 MB