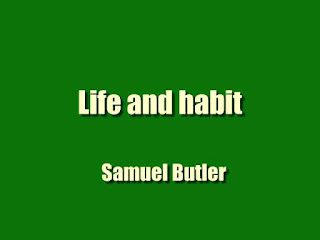 Since Samuel Butler published "Life and Habit" thirty-three years have elapsed — years fruitful in change and discovery, during which many of the mighty have been put down from their seat and many of the humble have been exalted.
I do not know that Butler can truthfully be called humble, indeed, I think he had very few misgivings as to his ultimate triumph, but he has certainly been exalted with a rapidity that he himself can scarcely have foreseen. During his lifetime he was a literary pariah, the victim of an organized conspiracy of silence. He is now, I think it may be said without exaggeration, universally accepted as one of the most remarkable English writers of the latter part of the nineteenth century.
I will not weary my readers by quoting the numerous tributes paid by distinguished contemporary writers to Butler's originality and force of mind, but I cannot refrain from illustrating the changed attitude of the scientific world to Butler and his theories by a reference to " Darwin and Modern Science," the collection of essays published in 1909 by the University of Cambridge, in commemoration of the Darwin centenary. In that work Professor Bateson, while referring repeatedly to Butler's biological works, speaks of him as " the most brilliant and by far the most interesting of Darwin's opponents, whose works are at length emerging from oblivion."
The present edition of " Life and Habit " is practically a re-issue of that of 1878. I find that about the year 1890, although the original edition was far from being exhausted, Butler began to make corrections to the text of "Life and Habit," presumably with the intention of publishing a revised edition. The copy of the book so corrected is now in my possession.
In the first five chapters, there are numerous emendations, very few of which, however, affect the meaning to any appreciable extent, being mainly concerned with the excision of redundancies and the simplification of style. I imagine that by the time he had reached the end of the fifth chapter Butler realised that the corrections he had made were not of sufficient importance to warrant a new edition, and determined to let the book stand as it was.
I believe, therefore, that I am carrying out his wishes in reprinting the present edition from the original plates. I have found, however, among his papers three entirely new passages, which he probably wrote during the period of correction and no doubt intended to incorporate into the revised edition. Mr Henry Festing Jones has also given me a copy of a passage that Butler wrote and gummed into Mr Jones's copy of " Life and Habit." These four passages I have printed as an appendix at the end of the present volume.
Contents:
Preface by R. A. Streatfeild. ,
Author's original preface
I. On certain acquired habits
Ii. Conscious and unconscious knowers — the law and grace . . . .
Iii. Application of the foregoing chapters to certain habits acquired after birth is commonly considered instinctive
Iv. Application of the foregoing principles to
Actions and habits acquired before birth
V. Personal identity
Vi. Personal identity (continued)
Vii. Our subordinate personalities
Vlli. Application of the foregoing chapters — the assimilation of outside matter
Ix. On the abeyance of memory
X. What we should expect to find if differentiation of structure and instinct are mainly due to memory
Xi. Instinct as inherited memory
Xii. Instincts of neuter insects
Xiii. Lamarck and Mr Darwin
Xiv. Mr Mivart and Mr Darwin
Xv. Concluding remarks.
Appendix — author's addenda
The book details :
Download Life and habit - by Samuel Butler 13.3 MB