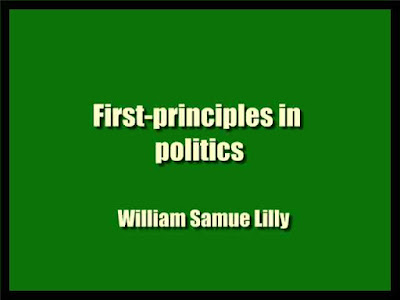 From the introduction:
When your treatise on Democracy and Liberty was given to the world, I had the pleasure of receiving a copy from the author. In expressing my thanks for the gift, I told you that I was engaged in a work dealing, to some extent, with the same topic, until I had finished the -task to which I had set myself. I was anxious to guard against the risk of unconsciously appropriating any of your thoughts. Three years have passed away since then.
At last, I have completed my book and have read yours. And I rejoice to find that, although I write from another standpoint, and pursue a different method, there is much in the conclusions reached by me for which I may claim the sanction ( vi ) of your authority.
It is, therefore, with special satisfaction that I avail myself of your kind permission to inscribe these pages with your name; a name which, as I have said elsewhere — and I prefer to repeat the words because they were not written ad hoc — may well stand as the symbol of all that is best in the historic literature of our age: impartial accuracy, magisterial serenity, sustained self-command, skill in truly discerning and in logically marshalling facts, power of ratiocination, the severity of taste, and purity of style. But it is not merely in conclusions that I have the happiness of finding myself largely in accord with you.
As I venture to believe, we agree in what is the cardinal doctrine of this work — the most fundamental of the First Principles upon which it insists. And my warrant for so thinking is a passage long familiar to me in your History of European Morals — a book which, as I well remember, came into my hands when I was an undergraduate at Cambridge, and took me captive by the charm of its diction and the cogency of its dialectic.
You there rank yourself among " those moralists who assert that we possess a natural ( vii ) power of distinguishing between the higher and lower parts of our nature; " and you proceed to illustrate this point by a very striking comparison: " Man is like a plant which requires a favourable soil for the full expansion of its natural or innate powers: yet those powers, both rational and moral, are there: and, when quickened into action, each will discharge its appellate functions."
Here we come to the very root of the difference between the two schools of thought which at present divide the intellect of the world. I hold, with you, that reason is the characteristic endowment of man; that it is separated by a whole universe from instinct; and that what you admirably term " progressive energy " is a note of it.
The capacity for ethical development is possessed by the human race alone. And the root of the capacity lies in this: that man — and man alone — ^is animal rationale. Hence it is that I believe in the doctrine of the Natural right.
And I think one chief cause of the widespread disbelief in that doctrine is what you term, with just severity, " a very mischievous equivocation in the word 'natural.'"
The notion is common that if we assert a Law ( viii ) of Nature, we imply belief in a state of nature such as Rousseau, and the philosophes of the last century, vainly imagined. I suppose the late Sir Henry Maine did more than anyone else to popularize this misconception, by lending to it the authority of his great name.
Some contents:
A striking characteristic of the present day is the well-nigh total effacement, from the general mind, of the idea of law . . . . .1
Most so-called " laws " are not laws at all; they do not possess that character of necessity which is the essence of law ...... 1
This is true, for example, of the laws of conduct presented to us by Utilitarian ethics, and of the laws of comfort from which they are derived 1
It is true, for the most part, of the so-called laws of
Political Economy ..... 2
Again, if we keep strictly within the domain of the experimental sciences, we have no right to speak of laws; for necessity has no place in pure physics. It is a metaphysical idea .... 2
To insist upon this truth is not mere logomachy. The idea of law, as a function of Reason, is of the utmost
the book details : Download First principles in politics - PDF ebook 8 MB