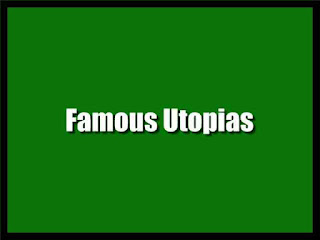 The term Utopia, as generally used, refers to those ideal states which are impossible of realization, both because they are peopled by ideal human beings uninfluenced by personal jealousies or individual passions, and because they are based, with but little regard for the complexities and varieties of real society, upon what the writer thinks ought to be, rather than upon the collective experience of mankind.
More broadly speaking, however, the term need not be confined to these "fantastic pictures of impossible societies, " or " romantic accounts of fictitious states, " as they have been called, but ! may be applied to any social, intellectual, or political/ scheme which is impracticable at the time when it is conceived and presented.
Thus enlarged, the field may be made to include schemes as diverse as More's Utopia, Campanella's City of the Sun, Cabet's Icaria, Morris's News from Nowhere; Rousseau's society of the Social Contract; and modern socialistic and communistic organizations, such as the Co-operative Commonwealth of Law.
During the next hundred years, political questions were supplanted philosophically. Harrington's Oceana dedicated to Cromwell in 1656, was not a romance, but " the first sketch in English political science of a written constitution limiting sovereignty, ' If " the only valuable model of a commonwealth," as Hume calls it. Hume himself, a century later (1752), in his Essays, Moral and Political, Part II., commenting on Plato, More, and Harrington, presented his " Idea of a Perfect Commonwealth, " and believed that in his Utopia he had discovered a form of government to which he himself could not, in theory, formulate * any considerable objection. "
the book details :