Mass and class; a survey of social divisions 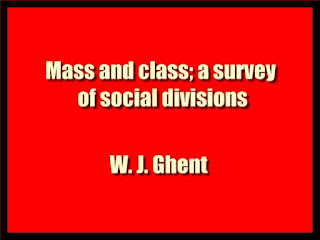 Mr Mallock has already preempted the title of Classes and Masses and the captious may thus be led to look upon the present title as something in the nature of an infringement. Such titular resemblances, however, are not unusual, particularly in the realm of controversy.
There are, among instances that will occur to readers, George Sand's She and He, with Paul de Musset's counterblast, He and She, and Proudhon's The Philosophy of Misery, with Marx's The Misery of Philosophy. The similarity in the present case may perhaps be unfortunate, but it was not to be avoided
. The title here used was not suggested by that of the earlier work, but was chosen because it seemed essential to the subject matter of the volume. But even had a nearer approach to the earlier title been made, the act would hardly have been reprehensible. For it is among the possibilities that a literary court of equity, should such a body ever be convened, might readily void Mr Mallock's exclusive right to his title on the plea of a non-user.
He fails to deal adequately with either classes or masses; what he calls classes are not classes, either economic or social, but mere aggregates of beings arbitrarily set apart by the author on the test of relative income; while his argument and illustration are confined solely to an attempt to prove the interesting assumption that out of the modern increase of wealth in Great Britain the " working classes " have received an altogether disproportionate share.
In the previous work I sought, by a satirical interpretation of the facts and tendencies of the time, to depict the not impossible return of a regime of lord, agent, and underling.
I have no excuses or apologies to offer for that work. As a warning alike to the apathetic and to the oversanguine, it served, I hope, a useful purpose. But the data which it employed were not, as my critics hastened to point out, the only data pertinent to the matter, nor was the regime predicted the sole and inevitable outcome. It is of the "possible alternative outcome," mentioned in the preface to the third edition of that work, that I have now to speak, — "the assertion of the democratic spirit and will, the conquest of the baronial regime, and the transformation of the industrial system " into one more in accord with the needs of the people.
In my present work I have sought to analyze the social mass into its component classes; to describe these classes, not as they may be imagined in some projected benevolent feudalism, but as they are to be found here and now in the industrial life of the nation; and to indicate the current of social progress which, in spite of the blindness of the workers, the capacity of the masters, and the subservience of the retainers, makes ever for an ultimate of social justice.
The author replies with this book to W. H. Mallock, Classes and Masses (London, 1896)
Contents:
Preface.--The lesson from history.--Classes and the class struggle.--Classes and class functions.--Class ethics.--Ethics of the producers.--Ethics of the traders.--The reign of graft.--The failure of the trading class.--Index
the book details :
Download Mass and class; a survey of social divisions - 4.2 MB