Thought power; its control and culture 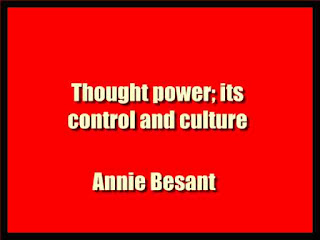 This little book is intended to help the student to study his own nature, so far as its intellectual part is concerned. If he masters the principles herein laid down, he will be in a fair way to co-operate with Nature in his own evolution and to increase his mental stature far more rapidly than is possible while he remains ignorant of the conditions of his growth.
The Introduction may offer some difficulties to the lay reader, and may perhaps be skipped by at the first reading. It is necessary, however, as a foundation for those who would see the relation of the intellect to the other parts of their nature and to the outer world. And those who would fulfil the maxim,
" Know thyself," must not shrink from a little mental exertion, nor must expect mental food to drop ready-cooked from the sky into a lazily-opened mouth. If the booklet helps even a few earnest students and clears some difficulties out of the way, its purpose will have been served.
The value of knowledge is tested by its power to purify and ennoble life, and all earnest students desire to apply the theoretical knowledge acquired in their study of Theosophy to the evolution of their own character and to the helping of their fellow men.
It is for such students that are written this little book, with the hope that a better understanding of their own intellectual nature may lead to purposeful cultivation of what is good in it and eradication of what is evil.
The emotion which impels to righteous living is half wasted if the clear light of the intellect does not illuminate the path of conduct; for as the blind man strays from the way unknowing till he falls into the ditch, so does the Ego, blinded by ignorance, turn aside from the road of right living till he falls into the pit of evil action. Truly is Avidya — the privation of knowledge — the first step out of unity into separateness, and only as it lessens does separateness diminish until its disappearance restores the Eternal Peace.
The Self as Knower. In studying the nature of man, we separate the Man from the vehicles which he uses, the living Self from the garments with which he is clothed.
The Self is one, however varying may be the forms of his manifestation when working through and by means of the different kinds of matter. It is, of course, true that there is but One Self in the fullest sense of the words; that as rays flame forth from the sun, the Selves that are the true Men are but rays of the Supreme Self, and that each Self may whisper: " I am He." But for you: present purpose, taking a single ray, we may assert also in its separation its own inherent unity, even though this be hidden by its forms.
Consciousness is a unit, and the divisions we make in it are either made for purposes of study or are illusions, due to the limitation of our perceptive power by the organs through which it works in the lower worlds.
The fact that Introduction. ? the manifestations of the Self proceed severally from his three aspects of knowing, willing, and energising — from which arise severally thoughts, desires, and actions — must not blind us to the other fact that there is no division of substance; the whole Self knows, the whole Self wills, the whole Self acts.
Nor are the functions wholly separated; when he knows, he also acts and wills; when he acts, he also knows and wills; when he wills, he also acts and knows. One function is predominant, and sometimes to such an extent as to wholly veil the others; but even in the intensest concern- t^tion of knowing — the most separate of the three — there is always present a latent energising and a latent willing, discernible as a present by careful analysis.