The essentials of philosophy 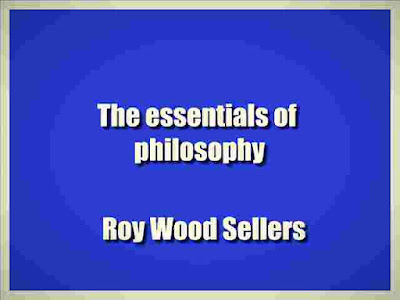 Excerpt:
A Preliminary Definition. — Speaking in general terms, we may say that philosophy is a persistent attempt to understand the world in which we live and of which we are apart. This preliminary definition stresses the broad-ness of aim characteristic of philosophy. It is an effort of the intellect of man to answer fundamental problems and gain a comprehensive view of the universe. The conception of the exact nature of philosophy has varied from period to period as man's view of the world and of his place in it has changed.
Hence the histoiy of philosophy has usually been the best index of those gradual alterations in the dominant interpretation of man and reality in which science and religion find their focus. Plato believed that a supersensible realm of ideas existed apart from the world of perceptual appearance, and his philosophy was at once a cause and an effect of this out-look. It explained what reality was and how the human mind obtained valid glimpses of it.
During the Middle Ages, the man was prone to consider earthly things the creation of a supernatural deity, and his philosophy was simply the earnest search for a systematic and consistent answer to such riddles as forced themselves upon his attention.
In the eighteenth century, men were convinced that there was an external physical world and that their knowledge of it was contingent upon the sensations produced in their minds by the stimulation of their sense- organs. Certain general problems immediately resulted, and philosophy was the persistent reflection upon these general problems. Thus philosophy has always been rejected upon basic problems such as the nature of reality, the distinction between the apparent and the real, the conditions of human knowledge. It has always been the conviction of the philosopher that these questions are unavoidable and that they can be solved only by intensive reflection.
A definite part of our task in the present introduction will be to explain the specific nature and inevitableness of these problems with which the philosophers of all ages have busied themselves.
Only in proportion as a concrete understanding of philosophical problems grows upon the student will he really understand what the veritable function of philosophy is. The Attitude of the Philosopher. — The attitude and ideals of the philosopher are essentially the same as those of the scientist. Both have the same mental curiosity and a keen desire for valid knowledge, the same willingness to bend theories into line with experience, the same faith in methodical analysis and persistent investigation and reflection.
Were we defining philosophy by reference to the trained mental attitude and intellectual habits de- manded, we should identify it with science.
In this sense, it is a science. Probably the philosopher ought to emphasize this aspect of his subject in this day in which so many people know something of the spirit of science. The philosopher at his best is inspired with the same disinterested zeal to solve intellectual problems as is the specialist in some branch of theoretical science.
In this age of early instruction in the special sciences, the student who finally comes to philosophy with mixed feelings of hope and doubt has already some acquaintance with the lives of such men as Newton, Galileo and Darwin.
He knows and admires in them their whole-hearted endeavours to solve problems in the domain of nature. It is this spirit, as much as what they have accomplished in the solution of specific problems, which attracts the generous-minded.
We can, therefore, best convey to the be- ginner a true idea of the philosopher by saying that he has the outlook of the scientist. Both concern themselves with knowledge and both seek it openly and in disregard of consequences.
The philosopher is not a mystic nor the champion of some esoteric cult; he is a scientist. The Difference Between Scientists and Philosophers. — ^And yet there is a difference. When a man is called a scientist, we tend to ask whether he is a botanist or a physicist or a mathematician or a chemist and so on, with the other alternatives in view.
We don't think of a man as being a scientist-in-general. We suppose that he is pursuing some particular kind of investigation which is easily classified along with other lines of investigation.
But to a good many a philosopher is just such a strange creature, a man who wants to be a scientist-in-general. Let us see whether we can explain the difference between the work of a specialist in science, a devotee of some particular science, and the work of a philosopher, without leaving the impression that the philosopher is a sort of jack of all trades and master of none, a man who wants to be a scientist and yet won't adopt a specific field.
the book details : Download 6.6