The essentials of logic 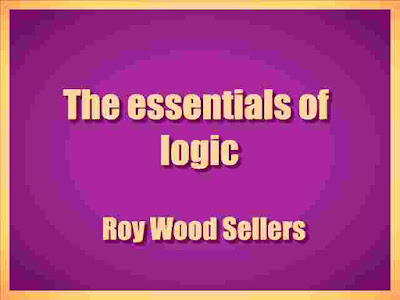 Except:
A Definition of Logic. Logic may be defined as the science of the principles and conditions of correct thinking. To the beginner, a definition serves mainly as a guide-post to direct Ms attention to the general character of the subject which he is about to study.
The above definition should therefore be taken merely as an indication of the field. The terms of which it is composed will gather content and meaning as the various topics are covered. Toward the end of the course, it is to be hoped that the student will be able to come back to the definition with a fuller grasp of its significance.
Logic is a science in the sense that it is organized knowledge involving principles. The various sciences have different fields for investigation, but all of them agree in their purpose, which is the establishment of satisfactory information bound together and illuminated by laws.
Thus, physics studies the most general characteristics of the physical world and seeks to reduce to order and interpret the facts it discovers; botany ex- amines the structures, functions, and histories of plants; and psychology gives its attention to the behaviour of creatures possessing consciousness. All these sciences seek to replace the loose and hazy notions of popular thought with exact and systematic knowledge.
Now logic has the same purpose, but its field is peculiar. It can- not be classed among the physical sciences which depend upon perception and measurement, nor among the biological sciences, nor, finally, among the social sciences.
In a very real sense, modern logic presupposes all these sciences and is somehow a science at second remove from things. It is a science about the mental aspect of the sciences. The mediaeval logicians pointed out that the mind first 'intends,' or directs itself upon, the external world, and that only afterwards does it direct itself upon the mental processes and methods it has used. We may say, then, that logic involves thinking about thinking.
Because man is naturally outward-looking and de- serious of practical results he is seldom clearly conscious of his methods and of the mental processes involved in thinking. It requires an effort for him to take this new attitude and to think about thinking, about those mental operations which make knowledge possible. But when he does so, he finds that the mind does work in an orderly fashion. It is the nature of this orderliness that logic seeks to bring into clear consciousness.
The Value of Logic. So far as logic is pure science, i^s value is essential of the same kind as that of any other pure science. It satisfies an intellectual curiosity, a desire to know.
the book details : Download