The smile: if you can do nothing else, you can smile 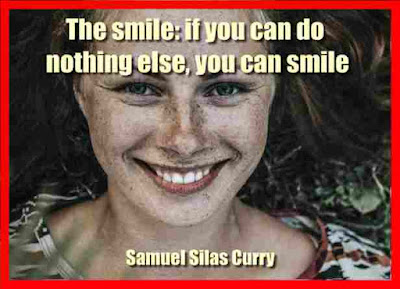 From preface:
Most people, even orators and actors, have peculiar conceptions, not to say misconceptions, of action as a language. One proof of this is found in the fact that the word " gesture," which names the least important of all phases of action, is the common name applied by most people to all the expressive movements, attitudes and bearings of the body.
The ordinary person has about as clear an impression of what pantomimic expression means as the little girl who was asked to define the word " chivalry " and said it was what she felt when she was cold.
To me, action is man's first language and the one primarily concerned with the revelation of character. Action, however, is a subject as difficult to discuss as it is to understand. It can never be explained and taught like other subjects. John Stuart Mill said that one who knows but a single language is apt to take words for things.
This principle applies more to the primary modes of man's expression, words, tones and action in different languages, than to Italian and French. If thinking an idea in French as well as English frees a man from confusing an idea with its sym- bol and gives him a better understanding of truth, how much more will the ability to realize the function of voice modulations and of the action of the body lead to a more adequate realization? Action as a language is more distinct in function and meaning from words than English is from French, or French is from German.
To be able to think the language of action prevents taking a mere word or symbol of an idea as a complete expression. If this is true, understanding pantomime is one of the important phases of education.
Action, however, is totally neglected at the present time. One reason for this neglect is the difficulty of understanding the subject or of even realizing its point of view. It has been so long regarded as of no importance, as only a kind of decorative adjunct without meaning, that it is difficult to awaken people to think in action, or to recognize it as having a great function in the revelation of human experience. A realization of our actions is necessarily a realization of the motives of our lives. It helps us to understand our fellow men and to enter into sympathetic touch with them.
Not without reason does action usually have dramatic as the qualifying adjective. In this little book, I have endeavoured to talk simply with the reader about something that has always been a necessary part of himself, something that he must practise every hour, not to say every moment of his life, — something we all practise, most of us thoughtlessly, even chaotically.
Contents:
I. Our First Expression 9
II. Qualities of Expression 24
III. The Expressive Process 32
IV. Smile or Scowl 35
V. Smile or Frown 40
VI. Sign or Symbol 47
VII. Man's Elemental Languages 50
VIII. Does a Smile Represent or Manifest? ... 57
IX. Gesture, Position or Bearing 62
X. The Smile and Beauty 72
XI. Can the Smile Be Developed? ..... 77
XII. Modes of Improving the Smile ..... 90
XIII. The Smile as an Educational Aid .... 107
XIV. Negative or Positive? 115
XV. The Smile and Health 118
XVI. Ethics of Amusement 122
XVII. The Smile and Success .135
XVIII. Higher Functions and Influences .... 138
A Personal Afterword 146
the book details : Download 7.1 MB