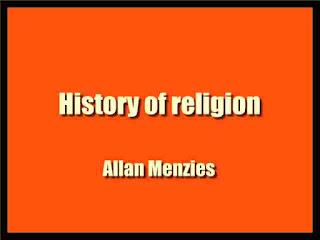 a sketch of primitive religious beliefs and practices, and of the origin and character of the great systems

From introduction:
This book makes no pretence to be a guide to all the mythologies, or to all the religious practices which have prevailed in the world. It is intended to aid the student who desires to obtain a general idea of comparative religion, by exhibiting the subject as a connected and organic whole, and by indicating the leading points of view from which each of the great systems may best be understood.
A certain amount of discussion is employed in order to bring clearly before the reader the great motives and ideas by which the various religions are inspired, and the movements of thought that they present. And the attempt is made to exhibit the great manifestations of human piety in their genealogical connection.
The writer has ventured to deal with the religions of the Bible, each in its proper historical place, and trusts that he has not by doing so rendered any disservice either to Christian faith or to the science of religion. In a field of study, every part of which is being illuminated almost every year by fresh discoveries, such a sketch as the present can be merely tentative, and must soon, in many of its parts, grow antiquated and be superseded.
And where so much depends on the selection of some facts out of many which might have been employed, it will no doubt appear to readers who have some acquaintance with the subject, that here and there a better choice might have been made.
The writer hopes that the great difficulty will not be over-looked with which he has had to contend, of compressing a vast subject into a compendious statement without allowing its life and interest to evaporate in the process. For a fuller bibliography than is given in this volume the reader may consult the works of Dr. C. P. Tiele, and of Dr. Chantepie de la Saussaye. It will readily be believed that the writer of this volume has been indebted to many an author whom he has not named.
Some contents:
THE RELIGION OF THE EARLY WORLD CHAPTER I
INTRODUCTION
Position of the science — Unity of all religion — The growth of religion continuous — Preliminary definition of religion — Criticism of other definitions — Fuller definition — Religion and civilisation advance together ..... Page I
CHAPTER II
THE BEGINNING OF RELIGION
Origin of civilisation — It was from the savage state that civilisation was by degrees produced — The religion of savages — All savages have religion — It is a psychological necessity . 16
CHAPTER III
THE EARLIEST OBJECTS OF WORSHIP
Nature- worship — Ancestor- worship — Fetish-worship — A supreme being — Which gods were first worshipped ? — Fetish-gods came first — Spirits, human or quasi-human, came first — Theories of Mr. Spencer and Mr. Tylor — Animism — The minor nature-worship.
HAPTER IV
EARLY DEVELOPMENTS BELIEF
Growth of the great gods — Polytheism — Kathenotheism — The minor nature-worship — The worship of animals — Trees, wells, stones — The state after death — Growth of the great religions out of these beliefs ...... 48
CHAPTER V
EARLY DEVELOPMENTS — PRACTICES
Sacrifice — Prayer — Sacred places, objects, persons — Magic — Character of early religion — Early religion and morality 64
CHAPTER VI
NATIONAL RELIGION
Classifications of religions — Rise of national religion — It affords a new social bond — And a better God — Example — The Inca religion .... .76
the book details :