Moral values - a study of the principles of conduct 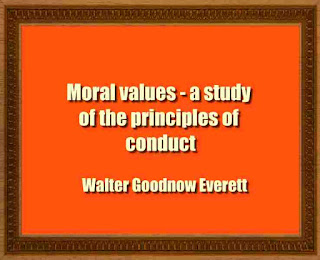 This volume, which is offered for the use of college and university classes, has grown out of the author's experience in trying to introduce students to the fundamental problems of ethics.
It is hoped, however, that the book may make an appeal to a wider circle of readers — to men and women of various callings to whom neither convention nor authority seems to offer satisfactory answers to the insistent problems of the moral life.
If such readers do not feel an interest in the more technical questions of philosophy, they are certainly concerned with those universal human problems that arise out of all genuine experience in the business of living.
The titles and divisions of chapters will indicate the portions of the work best suited to individual readers. The attention of the general reader may, however, be called to Chapter VII, the World of Values, to Chapter VIII, Individual and Social Values, and also to the discussions of Moral Law, Freedom, and Morality and Religion. Several sections of this last chapter are devoted to the problem of evil. Contemporary events have served to make this problem keenly felt in many quarters where its significance has, in the past, been sighted or ignored.
The appearance of another book n the field of ethics may seem to demand justification by the presence of features that distinguish it from the many able works already extant. The most obvious characteristic of the present work is suggested by its title. All the problems of morality are here treated as problems of value. The principle of value is carried through from the first chapter to the last, where it is applied to the questions of religion.
All human activities, it is shown, are judged to be good or bad, better or worse, according to the contribution which they are thought to make to the worth of human life as a whole. Man is indeed the only being we know that subjects his conduct to this test; he alone keeps accounts and reckons the profit and loss of his transactions.
In making use of the concept of value I do not fail to remind myself that there is no magic in a word and that no term must be allowed to conceal difficulties or to offer an escape from the task of rigorous thinking. But the choice of terms is not indifferent; and, quite apart from other ad- vantages, the idea of value tends to bring ethics into more significant and helpful relations with the other sciences of value to which increasing attention is now being given.
I also recognize the inevitable abstractness which must mark every formulation of the moral ideal in terms of a single unifying principle. To avoid "vicious" abstractions, the appeal has been made to the concrete interests of life, which alone furnish the specific content of value. The effort towards concreteness finds perhaps its most complete expression in the chapter on The World of Values, which is entirely devoted to the task of showing where this content must always be found.
In these days of the tragic conflict of warring human loyalties, when the supreme sacrifice has been unhesitatingly made by millions on both sides, it ought to become clear, even to the most ordinary intelligence, that no feeling of inner loyalty or conscientiousness can prove a sufficient principle of conduct. It has seemed worthwhile, therefore, to disentangle with care the inner and the outer, the subjective and the objective factors in moral judgment. Chapters II and X are devoted to this purpose. Chapter II offers a criticism not only of Kantian formalism but also of the more subtle forms of subjectivism, including Professor Royce's doctrine of Loyalty.
One conclusion at least will, it is hoped, be clear to every reader — that morality is nothing more or less than the business of living, with aU the many-sided and complex interests which this business involves. Only confusion of thought and practical harm have resulted from the popular idea that morality is a special interest among other special and competing interests, and that "mere morality" can be satisfied by the observance of certain conventional virtues, as these are interpreted by current standards. What has been contended for is that morality is regard for all human interests in just proportion and harmony. Wherever a narrower conception prevails there is sure to be, at essential points, a fatal divorce between morality and life.
A solution to the pressing questions of the economic and social order, of political organization, and of international relations will never be found until they are recognized as of the very essence of morality. In offering the book to teachers of ethics, two or three further remarks may not be out of place.
The textbook form has been deliberately avoided from a conviction that the elaborately subdivided and analyzed paragraphs of the traditional manual fail to tax adequately the powers of the student, and also tend to leave him with fragmentary ideas rather than to lead him to work through the meaning of fundamental principles. For elementary classes whose work is limited to a single semester, it may prove desirable to make selections from the text.
The topics into which the chapters are divided will in general provide a ready means of such selection. Apart from the numerous references to the Literature of the subject that appear in the footnotes, no bibliography has been added. Useful bibliographies abound, and every teacher has his favourite selections of literature for the use of students.
the book details : Download 10.8 MB