An historical interpretation of philosophy 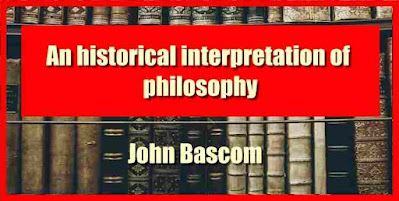 From the introduction:
It is not our object, in the present work, to offer the facts of philosophy in a form more acceptable to ourselves than the elaborate works now current; much less do we expect to add, at any point, to the fulness of these presentations. Our aim is simply to make, in as brief a compass as possible, a contribution to a clearer understanding of the facts of philosophy in their dependence on each other, and in the conclusions to which they naturally lead.
In accomplishing this purpose, we shall have occasion only for a brief statement of the primary features in the different phases that philosophy has assumed, and shall take for granted considerable familiarity with the topics under discussion.
If we render any aid, it will be an aid in comprehending the facts rather than in securing a more complete knowledge of them. We shall be more interested in the distinctive and extreme positions which writers and schools of philosophy have taken, the peculiar impulses they have felt and im- parted, than in the limitations, qualifications, and partial retractions by which they have striven later to restore the balance of thought and to defend themselves against attack.
The points emphasized will be those which define the directions of philosophical inquiry, and which best serve to mark the dependence of its successive positions in its descent to our time. Our work should be judged wholly by this its explanatory purpose.
There are two sorts of superficiality — the possession of numerous facts that are not well understood, the possession of theories that are not well sustained by the facts. It is against the first of these that our contention chiefly lies in this interpretation of philosophy.
The very multiplicity of phenomena may hide from us their significance, and leave us content with the simple knowledge of acquisition. Our present effort is to penetrate the meaning of phenomena, not to multiply them. We shall be satisfied, j on the side of instruction, if we do not misrepresent or I pervert them; we shall be wholly satisfied, on the side of 1 exposition, if we assist the reader in pursuing the paths of philosophy with increased insight and pleasure.
All these ingenious and obscure ramifications of thought have grown out of each other, have served partial and temporary purposes of explanation, and, in spite of appearances, have led us somewhat nearer the goal of truth.
Their extreme statements have been compensatory movements that have helped to restore the equilibrium of the mind. This supreme fact in the philosophy of coherency, we shall endeavour to bring more distinctly into the light. Metaphysics are often derided and avoided as worthless, sporadic products of speculation, because this their inevitableness, both in the efforts after growth and in the errors of growth, is not sufficiently felt.
The most comprehensive outlook we can possibly take of the products of the human mind is one in a survey of those manifold phases of philosophy by which it has sought to explain the world to itself. The dates given are, for the most part, those of Ueberweg.
the book details : Download  9.8 MB