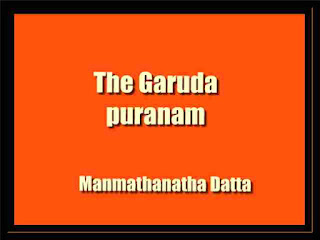 From introduction:
the Halayudha's Brahmanic Sarvasvam. Chakrapani Dntta has quoted many a recipe from it, and the Vishnu DharmottaraM, according to several eminent authorities, originally formed a portion of the Garuda Puranam.
All these [factors emphatically demonstrate the fact that the Garuda Puranam was in existence even before the tenth century of the Christian Era. On the contrary, we have reasons to believe that, the hosts of Puranas and Upapuranas were composed in the age of Brah- manic renascence, which immediately followed the overthrow of Buddhism in India.
The Garuda puranam, like the Agnf, Shiva, Padma, and the like Puranas, were the exponents of the victorious Brahmanism, which, being inevitably divided into schisms, tried to invest the tutelary deity of each sect with the attributes of supreme divinity or Brahma and to equip its members with a complete code of rituals, law and other necessary information regarding the incidents of everyday life, subservient to, and in conformity with, the Vedas and the Vedic literature.
Thus each schism or faction, or more correctly, each Puranam, the scripture of each sect of special, tutelary divinities, became a new school of law, medicine and metaphysics, etc., re-instating the old errors of the Vedic literature, as if to ignore the many advanced truths and principles of the later day Buddhistic science, and to confirm the victory of Brahmanism even in error and fallacy.

The description of the incidents of the life of Buddha, however meagre and incidental it might be, and the occurrence of the name of Sushruta in the medical portion of the Garuda Puranam leaves not the slightest doubt that its author was intimately acquainted with the Buddhistic literature of the age, both medical and metaphysical. It is a settled fact of history that the Sushruta Samhita, at least the recension of the Sushruta Samhita by the Buddhist Nagarjuna, was written in the second century before the birth of Christ. Now, the Sushruta Samhita says that the number of bones in the human body is three hundred.
The Vishnu Smriti (Institutes of Vishnu) following the orthodox (Vedic) non-medical opinion on the subject gives it as three hundred and sixty-six.
We know that Nagarjuna, the Buddhist redactor of the Sushruta Samhita, mentioned in his recension of the work that there are " three hundred bones in the human organism, but the followers of the Vedas say that their number is three hundred and sixty'' which tallies with the number given in the Yajnavalkya Samhita. The Garuda Puranam gives the number as three hundred and sixty-two {Asthnam Dvyodhikam Proktam Sashthyadkika Satatrayam) —a sort of compromise between the Vedic and the Buddhistic osteology, or between the dictates of conscience, imperatively urging the man to state the whole truth, and the pride of conquest impelling him to set up a schism against the truth.
The author of the Garuda Puranam, whoever he might be, must have been sufficiently familiar with the works of Nagarjuna and other Buddhistic Medical Acharyas so as to be fully convinced of the truth of their statement and attempted to make the Vedic number of skeletal bones as near to the truth as possible.
This fact serves to throw new light upon the date of the composition of the Garuda Puranam. It unmistakably points to a period of history when the victorious Brahmanism once more attempted to restore the teachings of the Vedas in their pristine glory, and the truths of the Buddhistic science or metaphysics. were still too potent a factor to be ignored or lightly dismissed — >a fact which supports our contention and' lends a plausible colour to the view we have adopted as regards the probable date of the composition of the Garuda.
The second question, that confronts us, is the purity of the text, i.e., whether the Garuda Puranam, as we now possess it, is what it was originally written by its author; or whether its bulk has been considerably increased by subsequent' additions?
In the first chapter, we learn that the Puranam consists of eight thousand and eight hundred verses, and the subjects dealt with therein are the creation of the universe, Pujas, Holy pools and shrines, Cosmogony and Geography, Ages of Manus, Duties of different social orders, Gift-making, Duties of kings, etc., Laws, Vratas, Royal dynasties, Therapeutics with ^Etiology, Vedangas, Pralaya, Laws of Virtue, desire, and money, and Knowledge (of Brahma and external things).
These then were the main themes that were originally dealt with in the Garuda Puranam, and we may say that this was so- 1 in the light of the principle of Adhydya Samprav'tkhUga (classification of chapters: which forms one of the cardinal rules informing the plan of a Sanskrit work. We regret to say that, manv things, having no legitimate connection with the main theories of this Puranam, nor having a direct bearing thereon, have been added to it, and a large mass of original matter has been expunged from it so as to bring it within the compass of the eight thousand and eight hundred Slokas, as laid down in the introductory chapter.
Thus we see that the Pretakhanda or Vishnu-dharmottara was added to it by way of an appendix, and the reason of these successive accretions to the text can be easily understood if we consider that, the Garuda Puranam, like the Agni, etc., although originally a compendium of the available Brahminical knowledge, and rituals, pursued and followed by the Vaishnava section of the community, came to gather in many tributaries from the other branches of Brahmanic thought and religion, as the distinction between the sect of Vishnu and other sects of S'iva and Sakti etc., came to be less marked and pronounced, and the points of difference or antagonism between them were more rounded off.
the book details : Download The Garuda puranam - 18.3 MB  - 800 pages