Egeria: or, Voices of Thought and counsel (Quotations) 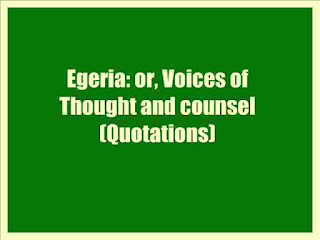 The collection which follows has been the unpremeditated accumulation of many years. It constitutes a body of sentiment and opinion, which, I trust, will commend itself to other minds, and be justified in the thought, feeling, and experience of lives. Some of it may have been derived from a very excursive reading; indeed, it is scarcely possible that it should be otherwise: but I feel very sure that the greater portion of it has grown out of a purely individual experience, from the patient as well as passing observation, and forms the conviction of a mind, the habits and training of which have been of a kind always to nourish proper independence. Some of the opinions here expressed may startle: there is no good reason, however, that they should offend.
You and I, gentle readers, may differ in many of our notions; but if we do not differ, how shall we expect to satisfy either mind and by what process should we discover truth ^^Let our differences be of the sort only which music justifies and requires, in which a certain amount of discord is admitted as one of the most necessary ingredients of harmony.
Egeria is the Muse of Counsel. She is described as the mysterious nymph who met Numa Pompilius and taught him how to govern. She met him always in solitude, and Solitude is the nurse of Thought. She met him in the groves, which are places favourable to meditation. She met him at twilight when a certain calm usually over- spreads the soul — the passions being in repose — and when the mind consciously hovers, as it were, between the two worlds of Time and Eternity, in some degree partaking of both.
Egeria is a beautiful fancy of the old Tradition. Thought and Study are beguiled to the solitude, where Wisdom puts on the aspect of Love, for the better persuasion of the pupil. ^Through such, influences, we might naturally expect that Counsel should be at once grateful and easy of attainment. We should, each of us seek for an Egeria; — for Numa, though a prince, was thus honoured, only because of his attributes as a man!
the book details : Download 4.9 MB