A half-century among the Siamese and the Lāo 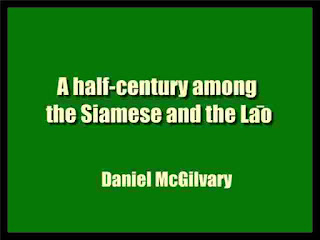 Missionary biography is one of the most interesting and instructive of studies. It is, however, a department of missionary literature to which Americans have not made a proportionate contribution. The foreign missionary Societies of the United States now represent more missionaries and a larger expenditure than the European Societies, but most of the great missionary biographies are of British and Continental missionaries so that many
Americans do not realize that there are men connected with their own Societies whose lives have been characterized by eminent devotion and large achievement. Because I regarded Dr McGilvary as one of the great missionaries of the Church Universal, I urged him several years ago to write his autobiography.
He was then over seventy-flve years of age, and I told him that he could not spend his remaining strength to any better advantage to the cause he loved than in preparing such a volume. His life was not only one of unusual length (he lived to the ripe age of eighty-three), but his missionary service of fifty-three years covered an interesting part of the history of missionary work in Siam, and the entire history, thus far, of the mission to the Lao people of northern Siam.
There is no more fascinating story in fiction or in that truth which is stranger than fiction, than the story of his discovery of a village of strange speech near his station at Pechaburi, Siam, his learning the language of the villagers, his long journey with his friend, Dr Jonathan Wilson into what was then the unknown region of northern Siam, pushing his little boat up the great river and pausing not until he had gone six hundred miles northward and arrived at the city of Chiengmai.
The years that followed were years of toil and privation, of loneliness and sometimes of danger; but the missionaries persevered with splendid faith and courage until the foundations of a prosperous Mission were laid. In all the marked development of the Lao Mission, Dr McGilvary was a leader — the leader. He laid the foundations of medical work, introducing quinine and vaccination among a people scourged by malaria and smallpox, a work which has now developed into five hospitals and a leper asylum. He began educational work, which is now represented by eight boarding schools and twenty-two elementary schools and is fast expanding into a college, a medical college, and a theological seminary.
He was the evangelist who won the first converts, founded the first church, and had a prominent part in founding twenty other churches, and in developing a Lao Christian Church of four thousand two hundred and five adult communicants. His colleague, the Rev. Dr W. C. Dodd, says that Dr McGilvary selected the sites for all the present stations of the Mission long before committees formally sanctioned the wisdom of his choice.
He led the way into regions beyond and was the pioneer explorer into the French Lao States, eastern Burma, and even up to the borders of China.
Go where you will in northern Siam, or in many sections of the extra-Siamese Lao States, you will find men and women to whom Dr McGilvary first brought the Good News. He well de- serves the name was so frequently given him even in his lifetime
the book details : Download