The religion of the primitives 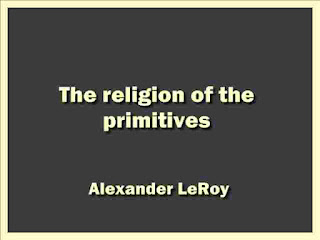 From the introduction:
My career as an African missionary, interrupted by a short sojourn in Europe and another in India, began in 1877 on the eastern coast. I brought with me all the current ideas as to the black populations: fetichist peoples, without religion or morality, with no family life, stupidly adoring animals, trees, and stones. It was the period when by the gate of the Zanzibar coast their "mysterious continent" was opened, with Livingstone, Samuel Baker, Speke, Grant, Cameron, Stanley, Emin-Pacha, and Victor Giraud as the first explorers of the International African Association, and the heroic pioneers of the Catholic and Protestant missions.
All set out from Bagamoyo or passed through it. There also, from the distant interior, caravans arrived daily after the rainy season with 500, 1000, or 2000 men. These brought to the coast ivory, copal, skins, and slaves, especially the last-named, showing the attentive observer such varied types of that strange world, that on this shore, so little known to the white man, in the course of a year he might see filing before him representatives of all the Bantu tribes, from the Ba-ganda of the Victoria !N^yanza to the Wa-Yao of the I^yassa, the Manywema of Upper Congo, and the distant inhabitants of Katanga. Bagamoyo was, therefore, an incomparable field of observation.
Moreover, until 1893 the functions entrusted to me obliged me to make numerous journeys with more or less prolonged sojourns from Somaliland to Mozambique, from the Tana to the superb masses of the Kilimanjaro, from the islands of Zanzibar, Pemba, and Mombasa to the Massai plains and the interesting mountains of Taita, Pare, Inguru, Usambara, and Tjruguru. In 1893 I had to pass to Gabon on the opposite coast where, under cover of the great equatorial forest or along the shores of rivers and lakes or on the sunny plains, there mingled other black populations, alike in many respects but so different in appearance, habits, and language as to offer a curious field for study.
In this world thus revealed to me, a world that may be considered primitive in many of its characteristics, everything was an object of observation and study for me; and I can truly say that, during the twenty years I lived there, scarcely a single day passed without bringing me some new element of instruction, correcting an idea, clearing up a doubt, modifying a hypothesis, furnishing an explanation, verifying a fact, disclosing a clue, removing an error, or revealing a new discovery. How often these observations, made and controlled on the spot, were found to disagree with the generalizations of well-known authors who are cited as oracles, whom one dare not contradict and who, with theories to sustain, have, perhaps unconsciously, too often solicited premature testimony in their favour!
How often I regretted having no book to guide me! Since none existed, how often I desired, later on, to begin this study on the religion of the primitives so as thereby to aid other missionaries by enlightening them in their apostolate, helping them avoid serious misunderstandings, and cooperating to this extent in their admirable task! If there be an elementary principle for everyone proposing to lead his fellow-men to his own faith, it is, first of all, to know what they believe. There may be some points of contact where the beliefs of both will meet and perhaps, instead of arguing in endless and always somewhat irritating controversy, it will suffice to explain one's self in order to be accepted. But there is a still better reason.
The study of the beliefs of these primitive populations is in itself extremely interesting, not only because it forever nourishes the curiosity of those who like the exotic, not only because it is a new and attractive exploration into the depths of the human soul, not only because it is one of the necessary elements of ethnography, history, and philosophy, but also and especially because it reveals such astonishing points of comparison with the highest religions that we may indict the theologian unacquainted with it as ignorant of a part of theology.
What are these resemblances, how are they to be explained, and what do they prove? While our Christian scholars appeared uninterested in these questions, others took hold of them and soon found means of profiting thereby. Imagine them, in their first enthusiasm, announcing to us that, being more fortunate, more competent, more able (they might have added, better supported) than Voltaire and the encyclopedists of the eighteenth century, they have at last found the key to the "religious phenomenon" and all that relates to it.
The gospel of this new revelation has been taught for a long time in the universities of our capitals. They have been asked to disseminate their doctrine, and apparently, the moment has come for putting this teaching into the form of a catechism, placing it in the program of our primary schools, and imposing it on the minds of children, thus forcing positive religions to be replaced by non-religion or "the religion," i.e., "the aspiration toward the ideal and the unlimited perfection of man apart from all supernatural basis and sanction."
The Third International Congress of the History of Religions, held in Oxford (1908), showed that the new evangels were far from being in accord. This was so evident that some disrespectful journalists, in reporting its sessions, called it a "new Tower of Babel."

I. The Science op the History of Religions Applied to Primitives 1
II. The Primitive in the Presence of Nature. 38
III. The Primitive and the Family 62
IV. Belief 90
V. Morality 133
VI. Worship 173
VII. Magic 216
VIII. Comparison of the Religions of the Primitives 238
IX. Conclusions 282
the book details : Download 13 MB