The political ideas of modern Japan 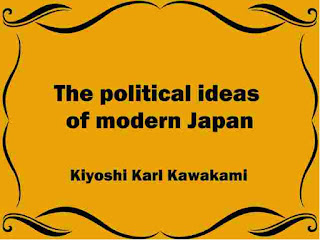 It is my first duty, as well as my greatest pleasure, to ex- plain that this monograph was prepared in partial fulfilment of the requirements for the degree of Master of Arts at the State University of Iowa. My major work at this University was in Political Science under the direction of Professor Benjamin F. Shambaugh. I was at the same time studying Sociology and Political Economy under Professor Isaac A. Loos.
The preparation of this monograph was first of all suggested by the absence in foreign libraries of literature dealing with the Politics — especially the political ideas — of modern Japan. The economic phenomena of modern Japan have been much written about in foreign languages, ^ but the domain of political thought has been left singularly untouched. Dr Tenaga's Constitutional Development of J a^an, BlwA Mr H. Furuya's System Refresentatif au Jafon (Bruxelles, 1899) are, so far as I am aware, the only works of the kind published in English and French respectively. Admirable as are these words, these authors do not discuss the development of political ideas which wrought out marvellous changes in modern Japan.
That such an important and interesting subject as the political ideas of a nation, which is now steadily coming to the front in the arena of the international rivalry, has been ignored, is a matter of profound regret. The modest ambition of the author of this monograph is to break the ground with the hope of directing attention to a hitherto uncultivated field.
Of tlie many works presenting the economic phases of Japan the following are worthy of special reference: T. Fukuda, Die Geselschaftliche und Wirtschaftliche Entwicklung in Japan; Y. Ono, Industrial Transition of Japan, in the Publication of the American Economic Association, Vol. V; J. Soyeda, A History of B uniting in Japan, in A History of Banking in all the Leading Nations; S. Tanaka, Geschichtliche Betrachtungen uber den Geistigen Verkehr Japans mit dem Auslande; Y. Kinoshita, The Past and Present of Japanese Commerce.
The present treatise is not primarily descriptive. It is argumentative and critical. Neither has it been attempted herein to realize that finality and exhaustiveness which is the product of the detailed knowledge of the expert. The virtue expected from such an essay as the one here presented will be rather a freshness of conviction than ripeness of thought.
My political convictions which are presented in this monograph may not please all classes. Nevertheless, I shall never cease to claim to be an ardent lover of my country from which I will never divorce myself. It has been complained by some who have read my manuscript that this essay has too many excursions into the domain of Rousseauism and modern European political theory generally.
Yet I have held to its original plan because its principal purpose is to show in what manner western political ideas have developed in Japan, what ideas have been accepted, modified, discarded, or misunderstood, and whether these ideas have had a wholesome or unwholesome growth.
To comply with this object I have felt it necessary to enter into a somewhat detailed discussion of the political principles of the modern thinkers of the West whose ideas inspired the pioneers of freedom in Japan. I have not dealt in detail with the political ideas and institutions of old Japan, inasmuch as the subject requires an exhaustive consideration if one wishes to be intelligible.
Many references in Japanese and Chinese which have been consulted have not been mentioned either in the bibliography or in the footnotes, since such references would not be understood by many American readers.
The Transactions of the Asiatic Society of Japan came to my notice after the earlier chapters of this volume had gone to press. Had I seen these valuable publications earlier, I should have referred to them in some of the earlier chapters as I have done in later ones. Mr J. Milne's Notes on the Koro-fok-guru or Pit- Dwellers of Yezo and Kurile Islands (Transactions of the Asiatic Society^, Vol. XX), for instance, should have been referred to in my discussion on the Pigmies. Preface vii I wish to express my special indebtedness to Professor Benjamin F. Sliambaugh, who has, in the midst of his arduous duties read the whole of my manuscript, giving many valuable criticisms and suggestions.
Acknowledgements are likewise due to Professor Isaac A. Loos. I have also to acknowledge my particular obligation to Dr W. E. Griffis, of Ithaca, New York, for candid criticisms; to Mr I. Yamagata, English editor of the Ban-Cho, a Tokyo daily, for furnishing me with materials which could have been secured only in my native country; and to Dr Paul Carus, editor of The Open Court, for valuable information concerning Buddhism. Ac acknowledgement is also due to my friend Mr L. H. Mitchell who assisted me in correcting clerical mistakes, and to The International Socialist Review for permission to reproduce from the said magazine a considerable portion of my article entitled Socialism in Japan. I am also indebted to Dr T. Tenaga for many valuable suggestions.
the book details : Download 5.8 MB