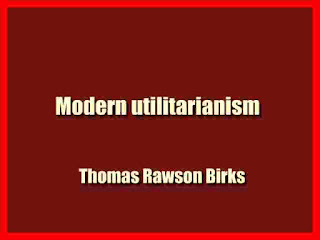 The systems of Paley, Bentham, and Mill Examined and compared

The present volume contains the main part of a course of Lectures, in the October Term of last year, on Modern Utilitarianism.
The subject is viewed historically, in connection with the views of Paley and Bentham, the criticisms of Mr Mill on those writers, and the statements and explanations of his own treatise. Several topics, however, included in that course, have been omitted, partly that the work might not swell to an inconvenient size; but also because they seemed to require a fuller treatment than could be given in the bounds of a single lecture, or one less controversial in form than those in this volume have inevitably assumed.
Various engagements, while preparing this work for the press, have hindered the treatment of the subject from being so complete and full as I should have desired it to be. But I trust that those who read with a view to gain a clearer apprehension of the truth on questions of high importance will find some real help in the present as well as in the previous work. I commend them both to the blessing of Him, who is the Lights- of the world, the only Source and Fountain of all true wisdom.
Casuistry, the second subject of the Knightbridge Professorship, requires, I conceive, in the present day some latitude of interpretation. It seems the least departure from its historical and proper sense to understand it as equivalent with Controversial Ethics.
It will thus form a natural transition from Moral Philosophy to the kindred and still higher subject of Moral Theology. It is only through conflict with plausible errors that we can hope to emerge from the low valleys, and climb the mountainsides of truth.
In entering on a subject so wide and various, my course seems almost defined by the labours of my predecessors, who have given a Review of English philosophers from Hobbes to Bentham and Coleridge, and a History of Moral Philosophy from the early times of Greece to the present century.
It is natural for me to avoid ground they have so lately traversed, and to begin with the ethical controversy, of which Cambridge and Westminster have been the two immediate centres during the last eighty or ninety years.
the book details : Download