Life of P. T. Barnum, written by himself; including his golden rules for money-making 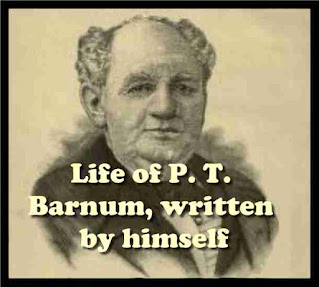 l life has had a career more crowded with incident, enterprise, and various intercourse with the world than mine. With the alternations of success and defeat, extensive travel in this and foreign lands; a large acquaintance with the humble and honoured; having held the preeminent place among all who have sought to furnish healthful entertainment to the American people, and, therefore, having had opportunities for garnering an ample storehouse of incident and anecdote, while, at the same time, needing a sagacity, energy, foresight and fortitude rarely required or exhibited in financial affairs, my struggles and experiences (it is not altogether vanity in me to think) cannot be without interest to my fellow-countrymen. Various leading publishers have solicited me to place at their disposal my Recollections of what I have been, seen, and done.
These proposals, together with the partiality of friends and kindred, have constrained me to put in a permanent form what, it seems to me, maybe instructive, entertaining and profitable. Thirty years since, for the purpose, principally, of advancing my interests as proprietor of the American Museum, I gave to the press some personal reminiscences and sketches.
They were, however, very hastily, and therefore imperfectly, prepared. Though including, necessarily, in common with them, some of the facts of my early life, in order to make this autobiography a complete and continuous narrative, yet, as the latter part of my life has been the more eventful, and my recollections so various and abundant, this book is new and independent of the former.
It is the matured and leisurely reviewing of more than half a century of work and struggle, and final success, in spite of fraud and fire the story of which is blended with amusing anecdotes, funny passages, felicitous jokes, captivating narratives, novel experiences, and remarkable interviews the sunny and sombre so intermingled as not only to entertain but convey useful lessons to all classes of readers.
And above and beyond this personal satisfaction, I have thought that the review of life, with the wide contrasts of humble origin and high and honourable success; of most formidable obstacles overcome by courage and constancy; of affluence that had been patiently won, suddenly wrenched away, and triumphantly regained would be a help and incentive to the young man, struggling, it may be, with adverse fortune, or, at the start, looking into the future with doubt or despair. All autobiographies are necessarily egotistical.
If my pages are as plentifully sprinkled with "I's," as was the chief ornament of Hood's peacock, " who thought he had the eyes of Europe on his tail," I can only say, that the " I's " are essential to the story I have told. It has been my purpose to narrate, not the life of another, but that career in which I was the principal actor. There is an almost universal, and not unworthy curiosity to learn the methods and measures, the ups and downs, the strifes and victories, the mental and moral personnel of those who have taken an active and prominent part in human affairs. But an autobiography has attractions and merits superior to those of a "life" written by another, who, however intimate with its subject, cannot know all that helps to give interest and accuracy to the narrative, or completeness to the character. The story from the actor's own lips has always a charm it can never have when told by another.
That my narrative is interspersed with amusing incidents, and even the recital of some very practical jokes, is simply because my natural disposition impels me to look upon the brighter side of life, and I hope my humorous experiences will entertain my readers as much as they were enjoyed by myself. And if this record of trials and triumphs, struggles and successes, shall stimulate any to the exercise of that integrity, energy, industry, and courage in their callings, which will surely lead to happiness and prosperity, one main object I have in yielding to the solicitations of my friends and my publishers will have been accomplished.
the book details : Download 25.7 MB