Bahaism, the religion of brotherhood and its place in the evolution of creeds 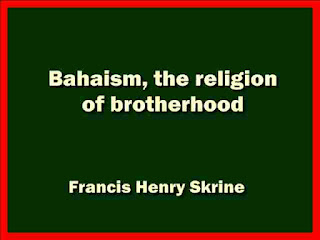 This little book is based on a series of letters that were published last summer in The Near East. They attracted the notice of 'Abdul Baha, who was good enough to ex-press approval of my attempt to expound the gospel preached by his illustrious father, Baha 'Ullah. I, therefore, yielded to a suggestion that I should give my sketch of Bahaism a more permanent form. In doing so I have rehandled the entire subject, in order to assign Bahaism a place in the evolution of organised creeds.
Their ultimate efflorescence is sometimes styled *' Mysticism "; but this is surely a misnomer. The Mystic searches Nature for symbols of God and cultivates his own soul that it may become worthy of union with Him. In the quest for personal holiness, he utterly ignores the cravings of his fellow-men, doomed, like himself, to grope in darkness. Mysticism is static as well as self-regarding. It injures the devotee, whose life is spent in sterile contemplation, aptly styled nombrilis^ne by French writers. After attaining imaginary perfection by mortifying the flesh, he is so elated by spiritual pride as to believe that all religion is needless.
Moreover, the instincts which he seeks to eradicate have their roots thrust deeply into the human organism. Bodily vigour depends on their reasonable gratification, and without it, the soul can never reach full development. Neglect of the physical laws which regulate our being has shortened many a precious life, and it accounts for lapses from an impossible standard that scandalises the virtuous and give the unregenerate cause for rejoicing.
Mysticism is injurious to the community, by withdrawing its noblest elements from participation in mundane affairs and forbidding them to reproduce their kind. History teaches us that more racial mischief has been wrought by the attitude known as '* Otherworldliness " than by the unbridled play of animal instincts.
Hindu Yogis, Buddhists, Sufis, Quietists, and the Contemplative Orders of Christendom were mystics in a greater or less degree. Their influence for good has been restricted and subject to eclipse. BAHAISM II A higher plane was reached by idealists such as St. Francis of Assisi, Tulsi Ddsa, and Baha 'Ullah. Like their forerunners, they scanned material nature for symbols of God and saw Him everywhere. They were equally bent on attaining personal holiness but regarded it as a means for rendering social service. Love all-embracing is the keynote struck by idealism.
It is dynamic as well as unselfish, recognising that man is man only by virtue of action; and it represents the final stage in the evolution of all vital creeds. Now civilisation has entered upon a social Renaissance, whose results none can foresee.
The spirit of brotherhood is abroad, bringing home to us the great truth that " God hath made of one blood all the nations of the earth." Idealists are multiplying rapidly, and their doctrines harmonise with the psychical atmosphere which pervades the inhabited world. It has generated the "un- rest " of which we hear and see so much. But, after all, unrest is a condition of progress
. Maeterlinck has remarked, in his Intelligence des Fleurs that " the vegetable kingdom sets mankind prodigious lessons of insubordination, courage, ingenuity and perseverance. If we  had applied to the removal of the various necessities which are crushing us, of pain, old age, and death, one-half of the energy put forth by any little flower in our gardens, we may well believe that our lot would have been very different from what it is." Through the kind offices of Miss E. S. Stevens (Mrs E. M. Drower) and M. Eustache de Lorey, I was able to submit my manuscript to 'Abdul Baha during his short stay in Paris. After hearing it translated viva voce into Persian, he authorised me to publish it and sent his portrait to serve as a frontispiece, with the text of an unpublished address delivered by him, which will be found in an appendix. M. de Lorey writes: " 'Abdul Baha is a great admirer of your work, and thanks to you for having written it.
He hopes that you will continue to interest yourself in Bahaism, and to propagate it by your pen." I may add that the Teacher has undertaken to give my views a much more thorough revision should a second edition be called for.
Download