An encyclopedia of occultism 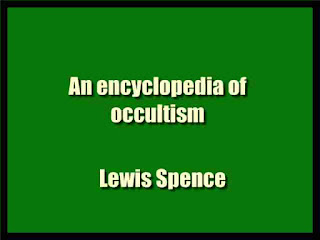 From the introduction:
In attempting to compile a volume which might serve as a handbook or work of reference to the several occult sciences, I have not lost sight of the extensive character of the subject, which, now that I have completed my task, is more than ever painfully perceptible. Excursions into the literature of the occult, of a somewhat extensive kind, led me to the belief that popular misconceptions concerning its several branches were many and varied. Regard- ing definitions there did not appear to be any substantial agreement, and application to encyclopedias and ordinary works of reference generally resulted in disappointment.
That a department of human thought so pregnant with interest and so abounding in vitality should not hitherto have been reduced to presentation in reference form struck me as singular, and I resolved to do what I could to supply what seemed to be a very real literary and scientific necessity. That I have been entirely successful is too much to hope.


But I have made a beginning, and this volume may inspire a more worthy hand to the compilation of a more perfect handbook of the subject. The science of Anthropology has of late years done much to elucidate questions relating to the origins of magic, and in writing this volume I have freely applied its principles. I have not, however, permitted scientific considerations to blind me to the marvellous and romantic character of the material in which I have laboured. Indeed, I am convinced that had I in any way attempted to subvert this innate quality of the occult to purely scientific considerations — however worthy of statement — the romance inherent in it would, by reason of its very native force have defeated such an intention, and, even if arrayed in the poorest of verbiage, would still retain its marvellous powers of attraction, no estimate of which can be too high.
The sciences known as “ occult ” may with every reason be regarded as the culture-grounds of the science of today. As everyone knows, alchemy was the forerunner of chemistry, astrology the direct ancestor of astronomy, and magnetism of hypnotism. But these sub¬ jects and their kindred arts have another claim upon our attention and interest, for in their evolution we can trace many of the beginnings of philosophic and ethical processes, the recovery of which renders their examination and study as important to the whole under¬ standing of the history of man as that of theology or the new mythology. A generation ago it was the fashion to sneer at the occult sciences.
But today, men of science in the foremost files of thought have placed them on the dissecting slab as fit subjects for careful examination. The result of their analysis during the past twenty years, if it has not permitted us to pierce the veil which divides man and the “ supernatural,” has, at all events, served to purge our sight sufficiently to enable us to see things on this side of it with a clearer vision, and to regard such researches with a more tolerant eye than hitherto.
For example, the fact of ghostly appearances is proven, whatever may be their nature, hallucinatory or otherwise, gold has been manufactured, if in small quantities, the theory of thought transference is justified, and hypnotism is utilised in ordinary medical practice. It is perhaps necessary that in introducing such a work as this, the author should express his own beliefs regarding the subject.
Concerning psychical science, I firmly believe that there arc u more things in heaven and earth ” than our philosophy dreams of, but the vast mass of evidential matter I have perused leads me to the conclusion that as yet we have merely touched the fringes of the extra-terrestrial, and that we must rely upon psychology rather than so-called material proof to bring us further enlightenment.
As regards magic, it will be seen that I have paid considerable attention to the scientific or anthropological theories concerning it. But let not the lover of that wondrous manifestation of the human imagination dread that he has been robbed of the mystery which clings to it as darkness cleaves tonight. I have amply provided for him in a hundred places, and if I have attempted to summarise current scientific hypotheses concerning magic, 1 have done so principally for the sake of completeness.
Although in every way in sympathy with the spirit of the esoteric societies, I have ventured to express my disbelief in the occult knowledge of the generality of their members. I am afraid, too, that I fail to grasp the arguments advanced by students of the secret tradition which plead for a belief in the “church existing before the foundations of the world,” and the “ inner sanctuaries ” of Christianity.
I fancy most readers will agree with me that it would be extremely difficult to raise anything like a respectable membership for such an institution, and as for its prehistoric existence, that is obviously a matter for the student of mythology. That both are the product of mystical foppery and vanity is only too painfully apparent.
A church that is alien to the bulk of humanity can possess little of the true spirit of Christianity. But I must not be conceived as deriding genuine mysticism and in this connection I would advise all interested in the Grand Quest, advanced as well as a neophyte, to peruse a recent admirable article by Mr A. E. Waite, which appeared in “ The Occult Review ” for September 1919, seems to me to define the aims of the mystic once and for all.

Download 70.5 MB - read on your PC for the best experience.