Mysteria - history of the secret doctrines 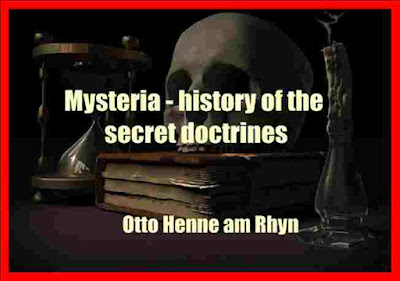 Excerpt from the translator preface:
The Mysteries of the Ancient Grecian religions; the cryptic teachings and occult interpretations of the popular religious beliefs communicated to disciples by the priests in the temples of ancient Egypt, Assyria, and India:
the interesting, half fabulous, half historical episode of Pythagoras and the Pythagorean League in Magna Graecia; the mystic, ascetic, and semi-monastic communities of the Therapeutae and the Essenes in Palestine a century before the birth of Jesus Christ; the later developments of Mysticism in the time of the Roman Empire, as seen in the history of Apollonius of Tyana and in Isis worship, Mithras worship, worship of the Great Mother, etc.; the secret creed and rites of the Knights Templar and the usages of the lodges .of the Stonemasons in the Middle Age; the constitution and procedure of the Femgerichte of Westphalia in the fourteenth and fifteenth centuries; the origin and history and the aims of Freemasonry, Rosicrucianism, Illuminism, and a swarm of honest and fraudulent secret organizations in modern' times: all these topics have before been made subject-matter of numerous learned tractates or of popular compends; but hitherto these doctrines, rites, associations, have not been studied in their unity,
One service which the author of this work renders to the student of this particular phase of human psychology the longing for mystery and secret associations is that he develops this relationship, thus enabling the reader to get a clear understanding of the whole subject.
But the author does very much more than coordinate the facts of mystic associations. He is both a scholar and an artist. Having amassed whatever information regarding the Mysteries and allied phenomena is accessible in universal literature, he handles his materials with the skill of a consummate master of style and of the art of popular exposition.
The result is a history of the ancient Mysteries and of their counter-parts and imitations in later times, as authentic as the most painstaking research could make it, yet possessing all the charm and grace of a literary masterpiece.
In all ages, the mystery has had a special attraction for mankind. Curiosity is innate in us. The child asks about everything, What is this, what is it for, why is it made so, or so?
The child fairly harries its parents with questions, never wearies of raising new ones, often so unexpected and so difficult, that it would puzzle the wisest philosopher to answer them. And this instinct of inquiry is dominant in the adult, too.
The grown man wants to know what is to be found behind every curtain, every locked door, in every sealed letter. And when sated with such trifles he must push inquiry further, into the infinite; must lift the veil that hides the wondrous image at Sais; must pluck from the forbidden tree of knowledge the tempting golden fruit. He would with the Titans storm heaven, and ascend to heights "where stirs no breath of air, where stands the boundary-stone of creation."
At last when Faust, after manifold crosses and disappointments, sees that "we can know nothing," the thought "consumes the heart within him."
And so we must ever be worried by the reflection