Books and ideals; an anthology 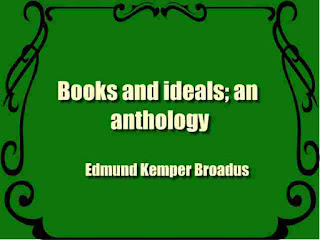 This little collection is the outcome of the editor's own well-remembered difficulties when he was first released from leading strings and given the run of the shelves. Courses, in school, and even, in a measure, in college, were things to be ' got up ', and the horizon of his reading was bounded by the books prescribed for them. It took him a long time to find that there were friends on the shelf as well as tasks and that the companionship of books is at once the readiest and the most satisfying of all companionship.
He thinks now that he would have been sped along this pleasant way if he had been more promptly taken into the confidence of some of the hearty old book-lovers of the past, and that he would have come less belatedly to share their enthusiasms. And he is inclined to believe that others in a similar stage of enfranchisement will gain by this association. There is a fine old custom, still happily continued, of presenting to a man who has distinguished himself in the service of his fellow-men, the freedom of a city.
The great city of Books is even more generous. It does not wait for distinction. It asks only eagerness. To all those who care, it extends its freedom, the companionship of books. In books, men have stored all that they knew, or through long years have gained, of knowledge, of wisdom, and of beauty. And other men, who themselves, in turn, have added to the store, have recorded their delight in this companionship.
If it is true that when a man speaks forth with genuine earnestness the thought of his own heart on this subject, other men must and will give heed to him, then to listen to those who have found delight in this companionship will be to gain for oneself the freedom of the city. But though the city of Books is ready to grant its freedom to those who have not yet achieved it, it would be a poor citizen who remained passive after that gift. To taste some books, to swallow others, to chew and digest a few — that is good, but it is not enough. Bacon adds that reading maketh a full man — and a full man need not stint in spending his knowledge.
From books, be they rightly read, comes a liberation of the spirit; and this liberation of the spirit will inevitably find its fruition inactivity and service.
The companionship of books.-- The liberation of the mind.-- Study and fruition
the book details : Download 8.8 MB